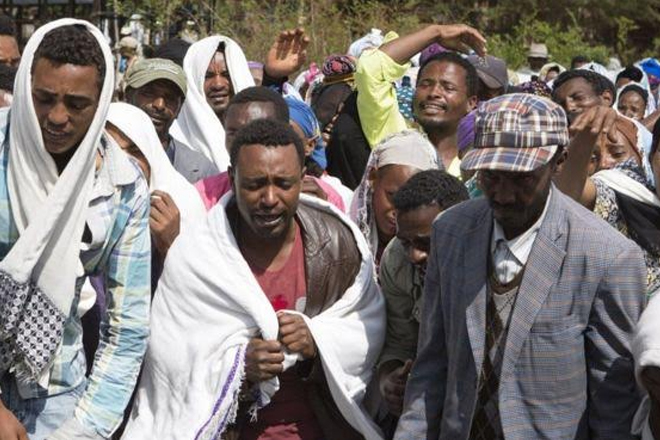 The protests have been sparked by fears that a plan to expand the capital’s administrative control into the Oromia region will displace Oromo farmers.

HRW also called for the release of an Oromo politician arrested last month.

The government has accused Oromo protesters of links with terror groups.

Last month, officials said five people and an undisclosed number of security personnel had died in the protests.

Prominent Oromo intellectuals “who they feel have influence over the population” have also been targeted by the government, HRW researcher Felix Horne said in a statement.

“He was first taken to the notorious Maekalawi prison, where torture and other ill-treatment are routine,” it said.

“The 54-year-old foreign language professor was reportedly hospitalised shortly after his arrest but his whereabouts are now unknown, raising concerns of an enforced disappearance.”

The OFC is Oromia’s largest legally registered political party, but holds no seats in parliament, the rights group said.

Two journalists were also arrested in December – it is not clear on what charges but the country criminalises any reporting considered by the authorities to be an encouragement to terrorism.

The government says other views are being taken into consideration for the “master plan” to integrate parts of Oromia into Addis Ababa.

BBC Africa correspondent Alistair Leithhead says demonstrations are rare in Ethiopia and the current Oromo anger over urban planning is an expression of much older complaints over a lack of political and economic inclusion.

At the last census in 2007, the Oromo made up Ethiopia’s biggest ethnic group, at about 25 million people out of a population at the time of nearly 74 million.