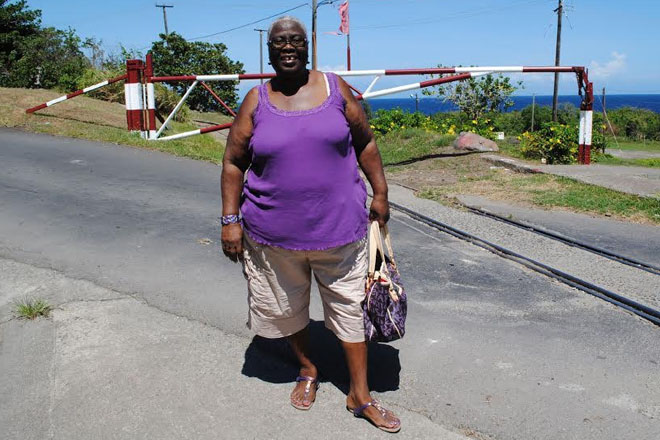 Ex-sugar worker Henny Bing: PM Harris is a man of God who talked from his heart

Basseterre, St. Kitts — She did not cut cane, but she worked in the sugar industry for a total of 23 years but was retired on medical grounds. When the industry closed in 2005, all she received was a gratuitous payment of EC$1,500. She cried foul.

Ms Alison Henrietta Williams, better known as Henny Bing, had joined the St. Kitts Sugar Manufacturing Company in March 1975 as a railway gate attendant outside her home village of Tabernacle. That it did not involve cutting and carrying of cane, it was not a backbreaking job. But the long hours of standing, day and night, in the sun and rain, ruined her back.

She was retired on medical grounds in March of 1998, and she took it well as her wellbeing was paramount. Social Security started paying her disability benefits. So, when the sugar industry closed in 2005, she rightly joined the long line of claimants to the big pay-out. She was dismayed at how they looked at her case.

It was a goodwill that ruined the life of a woman who had worked hard to bring up her family and build her young nation. But the wrong was righted nearly ten years later, when a smiling Henny Bing received, on Friday September 18th, this year, another gratuitous cheque, this time from the hands of the Prime Minister, the Hon Dr Timothy Harris.

“Before Dr Harris became the Prime Minister he promised he would see to it that the people get their money and I said that was a good idea,” says Henny Bing. “And when he won, he went to Venezuela and he got the money and he come back.

“He is a man of God so he had to keep his promise. I tell you he talked from his heart, so I know he was definitely looking for people. So when he said that he was going to look for that EC$16 million, I know that his heart went out for the people that were not properly compensated.”

Her eleven-year old granddaughter Miss Ryanne Liburd, who is a Grade Seven pupil at the Immaculate Conception Catholic School, agrees.

“My grandmother was a hard worker, opening the gate for the crop workers,” says the granddaughter. “I thank the Hon Dr Timothy Harris for giving her the money so that she can buy something nice for herself.”

Ms Alison Henrietta Williams was born in Mansion in 1948 but her parents moved to Tabernacle when she was six weeks old. Her father worked in the sugar industry while her mother was a housewife.

She attended the Tabernacle All Age School (now Edgar T. Morris Primary School), and left after Standard Seven. At age 15 she joined her mother who had since migrated to St. Thomas and only returned home in 1972 after her mother became sick and she was looking after her from her home in Tabernacle.

A neighbour, Ms Viola Boddie, who was working for the sugar industry as a railway gate attendant was offered a chance to go to St. Thomas, and she recommended for Ms Williams to be offered that job. It so happened and the young and energetic Ms Williams started working on March 10th, 1975. It was a Monday.

The work entailed closing the gate at the railway crossing on the road to the village when a locomotive is approaching and opening it to allow for vehicular movement after the train would have passed.

“The work I did was hard, standing out there in the hot sun, and when it is raining and at night too,” says Ms Williams. “I worked on shifts from 6:00 in the morning until 2:00in the day. When I work from 2:00 in the day, I work until 10:00 in the night, and when they have a lot of cane I have to work until six o’clock the next morning.”

There was a hut where she used to shelter and keeping her company was her puppy, Loose Dust, which was known to keep at bay persons with ill intentions (perceived or otherwise) towards a lady working at odd hours of the night out in the open. But her back started giving her problems in 1992, and was so bad by 1998 that she was let off on medical grounds.

When the Sugar Workers Restoration Fund officials came to Tabernacle as part of their outreach programme to educate former sugar workers about the new pay-out from an EC$16 million grant, she was the first in the line. The meeting was supposed to be at 8:00 am, but she was at the community Centre at 5:45 am. She has also put in a claim for her late father.

Asked why some sugar workers failed to claim on time yet there was an outreach programme, including outdoor announcements by famous town-crier, the late Mr Reginald ‘Calypso Reggie’ Thomas, she said: “They just could not believe the truth – they heard so many lies they didn’t believe this would come to pass. That is how people stand now, because they heard so much lies before.”