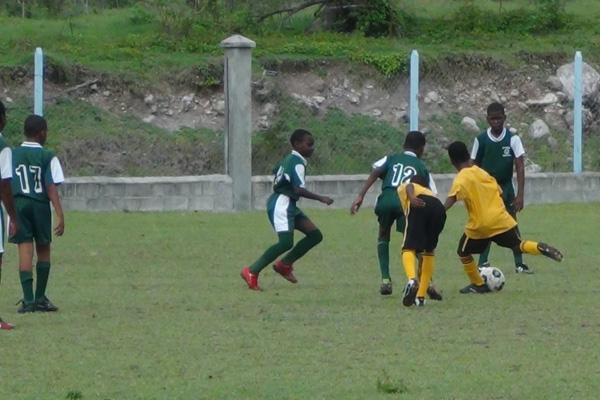 (Sports Page) Day two of the 2013 edition of the Giant Malt sponsored Primary School Football championship, did not produce any runaway winners. As a matter of fact, the three games played were all keenly contested as the scores will indicate.

The action continued on Thursday 31st October at the Bath Village Playing field with a spattering of spectators in attendance. However, the boys and girls from the six school s represented on the day seemed pumped up and anxious to shine.

The Elizabeth Pemberton Primary School’s POM-POM girls were also in their element, as they served to entertain the spectators with their new chants and well coordinated moves.

In match one, an A division fixture, St.Thomas’ Primary School just managed to hold on to a slender lead, as they were pushed right down to the final whistle by an equally energized Elizabeth Pemberton Primary School.

Goals of STPS:
1 goal each for Maurice Jones, Vickram Chanan and Tershawn Wilkinson

Match two was equally entertaining and competitive. Even though no goals were scored, the goalies and the defensive teams on both sides ought to be highly commended as they defended their separate goals stoutly. This as the St.Thomas’ Primary School and the Elizabeth Pemberton Primary again faced off, this time in a B division encounter.

Match three, an A division fixture, was another ring-dinger. This time it was the Maude Cross Prep School, coming up against defending champions, Ivor Walters Primary.

After the very intense exchanges, the Maude Cross team prevailed with a score line of 2 goals to 1

Scoring for the Maude cross team: Ammani Williams and Carlon Tuckett and for the Ivor Walters team, the lone goal scorer was Kevon Andrew.