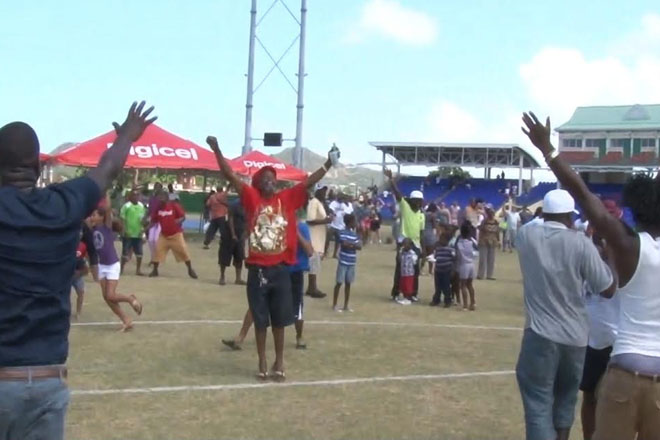 (ZIZ News) — Sunday was a big day for West Indies cricket with a double win in the Icc World T-20 Tournament and fans in St. Kitts were right there with them for the Windies Men’s Team’s big victory.

Warner Park erupted in cheers on Sunday afternoon when the West Indies team defeated England in the world t-20 tournament in India.

A live viewing party was organized to give fans a chance to watch the finals on the Jumbotron screen.

After a rocky start and brilliant scoring by Marlon Samuels, Dwayne Bravo, and Carlos Braithwaite the West Indies won by four wickets.

And the fans at Warner Park couldn’t be happier, some of them breaking into the Champion dance, made popular by the team during their tour of India.

Ambassador for Sport, Jonel Powell was the organizer of the viewing party and he said it was a great opportunity to use the park in a new and unique way and coming out of this they plan to make a contribution to local cricket development.

“We have a number of persons who came up…bars, vendors and we’re gonna talk to them and coming out of theme we’re gonna take a contribution from everybody and give it to Keith Arthurton for his cricket academy for the youth. It’s more than just having a party; it’s about developing cricket in St. Kitts and Nevis, developing Warner Park,” he said.

Minister of Sport, the Hon Shawn Richards praised Powell for organizing viewing party and said the event sets the right tone for upcoming events at the park.

“It does well for the upcoming CPL matches to be played right here in Warner Park. In terms of the facility, the facility is there but I don’t think that we’ve been using it as much as we ought to. SO this proves that the facility can be used in many other ways to bring families together and promote sports in St. Kitts and Nevis,” he said.

Digicel is one of the sponsors of the West Indies team and General Manager Sean Latty thanked the public for coming out to support the cricketers.

“It’s actually great to see that we won and we won in typical West Indian fashion, with a lot of excitement, a lot of camaraderie and the people in Warner Park are enjoying it and we thank them for coming out. Rest assured, West Indies Cricket is alive and well and we rest assured that the ministers and Ambassador Powell will continue to use Warner Park to celebrate activities and events like this,” he said.