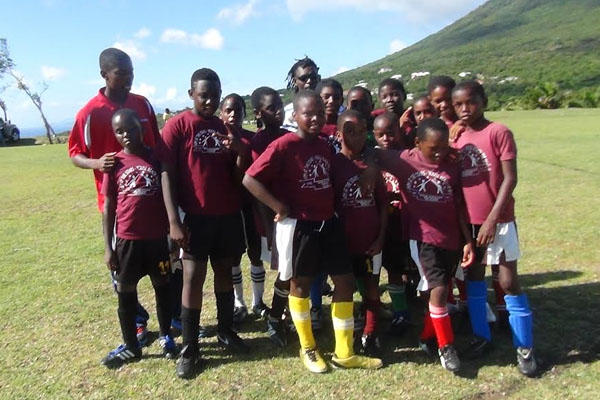 Within the first two minutes of the game, Jaheem Bartlette for the IWPS team aka FARI, made a breakthrough and left the goal keeper for the JLPS team flat footed and stranded as he pounded the back of the net.

For the entire game the JLPS team got off approximately three shots at goal. as the effective IWPS defensive mechanism worked overtime to stop all advances.

On the other hand the offensive play for the IWPS team was superb.

There were a lot of short, sharp passes and the players just seemed to be aware of where their team mates were at the appropriate times.

FARI struck the back of the net two more times to complete a hat trick of goals and his Father SAMBO Bartlette, arrived just in time to see him miss with a left booter.

The final score line was IWPS 4 to JLPS nil.

The other goal scorer for the IWPS was Taje Jeffers.

Coach for the IWPS, Aljay Newton was pleased with his team’s performance and noted that they set up the plays ‘like big men.’

In match two, a B division matchup; it will be St.Thomas’ Primary taking on the determined Nevis Academy team.