Warning: session_start(): open(/var/cpanel/php/sessions/ea-php56/sess_a3ab8598d34ccd4d07ac90d5bb1dee8e, O_RDWR) failed: No such file or directory (2) in /home/zizon/public_html/wp-content/plugins/iphorm-form-builder/includes/common.php on line 86

Warning: session_start(): Failed to read session data: files (path: /var/cpanel/php/sessions/ea-php56) in /home/zizon/public_html/wp-content/plugins/iphorm-form-builder/includes/common.php on line 86
 Federal Cabinet Continues to Power Ahead in Delivering for the People of St. Kitts and Nevis – ZIZ Broadcasting Corporation 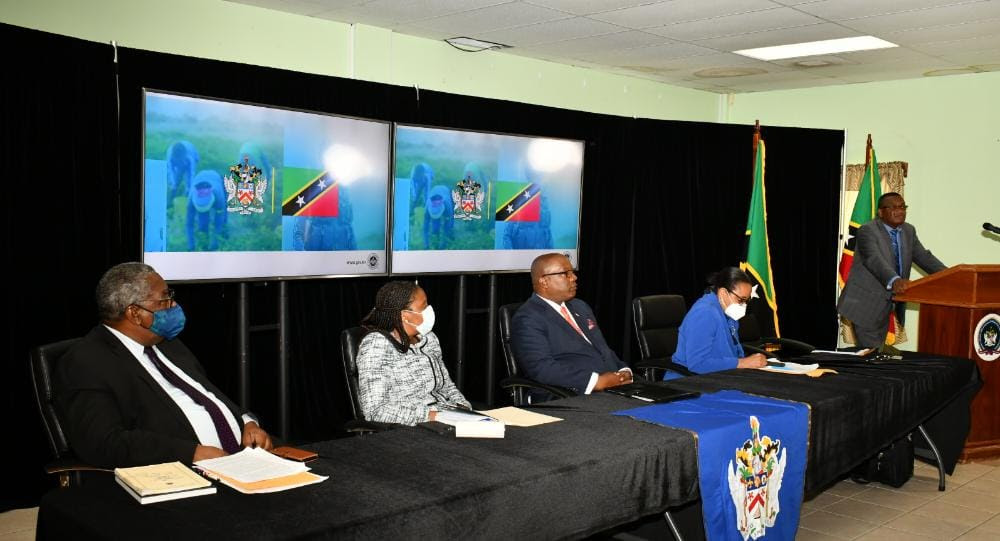 Federal Cabinet Continues to Power Ahead in Delivering for the People of St. Kitts and Nevis

This was confirmed today (Wednesday, June 01) when the Cabinet hosted a press conference to update citizens and residents on developments since the appointment of the new Cabinet about three weeks ago, and on significant milestones that have been achieved in that short time.

In his remarks, Prime Minister Harris stated that the “highly motivated” Cabinet has been meeting regularly under his leadership with full participation.

The Prime Minister said, “I and my ministers are engaged in a huge amount of work at Cabinet to drive forward programmes, right across government and its individual ministries and departments, aimed at securing the future stability and prosperity of this country that I love so dearly, and on improving the lives of all citizens and residents of our Federation. While some are busy creating mischief, propagating falsehoods and playing politics, we in this Cabinet have been working hard and delivering for our people and getting our beloved country back on track after the difficult times brought on globally by the COVID-19 pandemic and other externalities.”

Dr. Harris used the occasion to express his appreciation to his Cabinet colleagues and the senior civil servants for the hard work and service they continue to render faithfully to their country.

“My government is not simply continuing on an even keel, carrying out business as usual. It has been powering ahead at full steam, delivering for the people of St. Kitts and Nevis day in, day out,” the Prime Minister said.

One such deliverable, as outlined by Prime Minister Harris, was the payment of a 10-percent salary increase for employees and pensioners of the Government.

The honourable Prime Minister said the ten percent increase is “a major policy delivery that will make a very real difference to a very great number of people at this difficult time. We thank God for this provision. Indeed, the payment of the retroactive portion of the 10 percent increase covering the months of January to April, resulted in a significant $9.2 million extra being invested in our people and our economy at this time. Over one thousand and sixty-six (1,066) wage earners, three thousand eight hundred and twenty-two (3,822) salaried employees and one thousand three hundred and fifty-seven (1,357) pensioners and over two thousand five hundred (2,500) STEP workers have benefited. This is a significant relief provided at this time.”

Premier Brantley to Host Next Monthly Press Conference on July 28