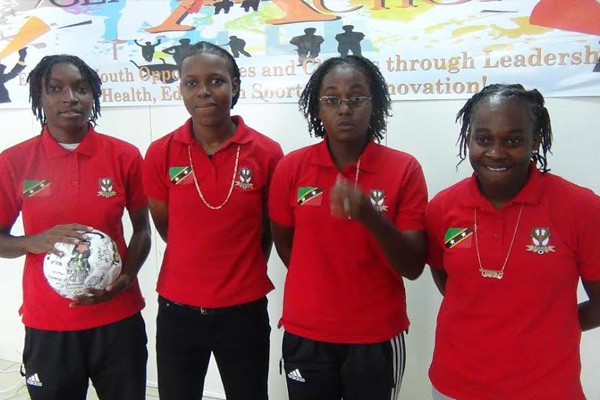 Sports Page — The four representatives of the St.Kitts –Nevis federation female Football team, spoke in an exclusive interview on Monday 3rd June about their recent outing.

Siana Leader; Rozel Liburd; Kazel Williams and Kerisha Powell all indicated that they were proud to represent the Federation’s team.

They gave a rundown of the tournament as follows:

Bermuda won on points and the Federation team placed second but also had the consolation of the team scoring the most goals in the tournament.

All four young ladies indicated that they were happy to be able to represent the Federation team and pointed to such benefits of playing Football as travel to many countries; possible scholarships and making new friends.

The Federation team has now qualified for the World cup playoffs scheduled for Trinidad in August. The top two teams will be eligible to go to the grand world cup tournament in Canada in 2015.All of the young ladies are confident that they will be making that trip to Canada.