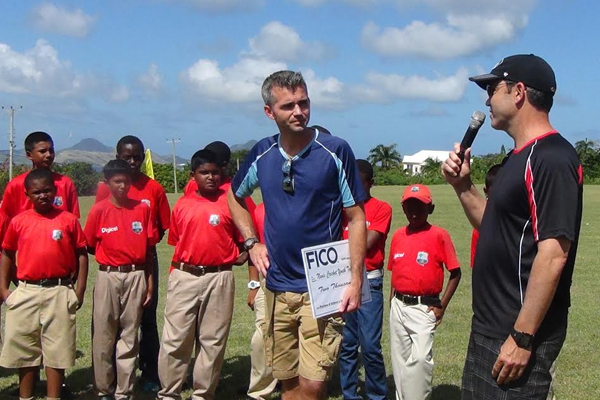 Sports Page — The group known as FICO which was visiting Nevis recently presented a significant cheque to the Nevis Sports Department on Friday 23rd January.

The FICO members had been guests at the prestigious Four Seasons Resort for the past week and according to two of their representatives, Messrs Steve Aderway and Rick Marshall, they felt obliged to give back to the Nevisian community after having such a grand time on the island.

Accepting the cheque on behalf of the Nevis Island Administration, was the Minister of Sports, the Hon. Mark Brantley, who made the connection for the USA and UK visitors present, in terms of the significance of Nevis by pointing to the fact that Admiral Horatio Nelson got married to a Nevisian woman and Alexander Hamilton, the gentleman whose face is on the American ten dollar bill, was actually born in Nevis.

He thanked the group for theior generous donation.

Premier of Nevis and former regional cricketer, the Hon Vance Amory, also thanked the group for their generosity and elaborated on the great benefits of the game of Cricket, which the visitors had engaged in as a part of the day’s activities.

He wished the group well and asked them to continue to make similar donations as long as they are able.

Among the dignitaries present at the presentation ceremony were Junior Minister in the Ministry of Sports, the Hon Hazel Brandy-Williams; Director of Sports, Jamir Claxton; Elquemedo Willet; Keith Arthurton and Carl Tuckett.

The Nevis under 13 cricketers, who are slated to benefit greatly from the donation, also played a match as part of the entertainment package for the guests.

Director of Sports Jamir Claxton indicated that the money will be used in the coordination of the sporting programs for the youths of Nevis.