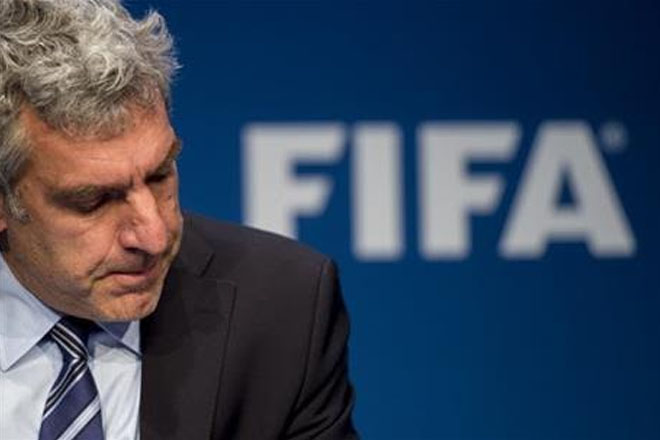 Geneva, Switzerlad (AP) — FIFA’s top spokesman left his job Thursday, hours after Sepp Blatter was urged to do the same by the European Parliament.

On Monday, De Gregorio was a guest of host Roger Schawinski on German-language station SRF. Schawinski closed the show by asking De Gregorio to tell his favourite joke about FIFA.

De Gregorio set up the punch line by saying the FIFA president, himself and secretary general Jerome Valcke were in a car, so who was driving?

After a pause for the host to comment, De Gregorio gave the answer: “The police.”

Earlier, lawmakers in Strasbourg, France, voted on a resolution calling for Blatter to speed up his planned resignation and let FIFA appoint an interim leader.

There was no immediate response from FIFA, which was plunged into crisis two weeks ago by separate American and Swiss corruption investigations.

Blatter is a target of the American investigation of corruption in soccer and Swiss federal agencies are leading a separate probe into the 2018 and 2022 World Cup bidding contests.

The election to replace Blatter is expected between December and March. FIFA rules require senior vice president Issa Hayatou of Cameroon to step up as interim president if Blatter leaves before the election.

FIFA announced the exit of De Gregorio in a terse statement that did not have comment from the president or his spokesman.

De Gregorio defended FIFA at a May 27 news conference called hours after the governing body’s headquarters were raided by Swiss police and seven soccer officials were arrested at a luxury Zurich hotel.

Then, the former journalist from Switzerland said it had been “a good day” for FIFA, which he said was committed to fighting corruption.

De Gregorio joined FIFA after working on Blatter’s campaign team during the 2011 presidential election. FIFA said De Gregorio “would be retained as a consultant until the end of the year.”

Valcke said in the FIFA statement that he was glad “we will be able to continue to draw on (De Gregorio’s) expertise until the end of the year.”