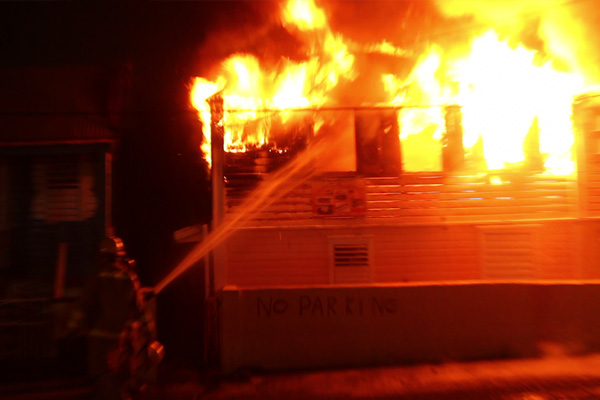 The two-storey house is located on the opposite side of the road to Warner Park.

Football fans coming from the Final Four Playoff Game between Hobson Enterprises Garden Hotspurs and Harris Paint St. Peters were alerted of the fire when gusts of smoke were seen coming through the windows of the structure.

When ZIZ News arrived on scene, huge flames were seen bursting through the windows and ceiling of the wooden house, said to be home to several individuals of Hispanic descent.

Witnesses at the scene told ZIZ’s camera crew that a female occupant was forced to jump from the second floor as the fire began to spread throughout the mostly wooden structure.

Officers of the Fire and Rescue Services responded quickly to the scene and had the fire under control within minutes.

There were no life-threatening injuries or fatalities reported.

ZIZ News will bring you more details into this incident as they become available.