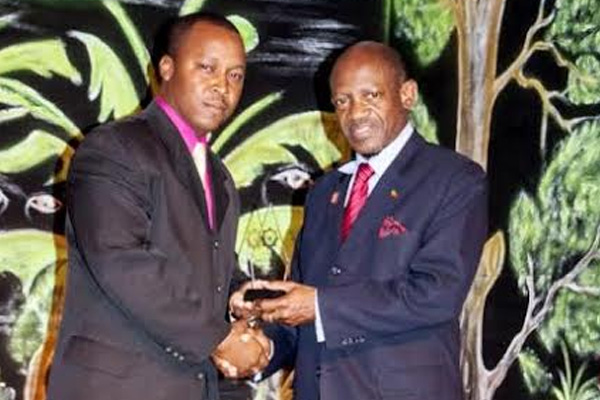 Basseterre, St. Kitts (SKNIS) — Fire Officers in the Federation were awarded for their exemplary work on Friday January 9.

The awards ceremony was a part of the week long activities held by the St. Kitts and Nevis Fire and Rescue Services (SKNFRS) for their 15 years since separating from the Royal St. Christopher and Nevis Police Force (RSCNPF)

Acting Fire Chief Everette O’Garro expressed his pleasure in honouring the officers, stating that hard work should always be commended.

“I think it is extremely important to recognize one’s contribution to the SKNFRS,” O’Garro said. “This no doubt, will help to motivate members to continue to perform at a high level which will resound to increased productivity.”

Mr. O’Garro echoed the sentiments of others in his department, and encouraged young men and women to join the organization as it is always open to interaction with the general public.

“Opening ourselves up to the community means a lot in attracting potential members,” he said. “This is why most of our activities throughout the week were centered on engaging the general public and displaying the importance of the service we provide.”

Lesroy Caines, Fire Sub Officer (FSO) stationed at Robert Llewellyn Bradshaw Airport (RLB) was awarded for his long service in SKNFRS and said how honoured he was having served 19 years.

“I am feeling very proud for being in the service for so many years,” Caines expressed. “My decision to become a fire officer was a good one and I love the organization. I am very thankful to receive this award.”

“I feel honoured to be selected for this special award among so many others who in my mind performed an excellent task,” he said. “The performance that would qualify anyone for this category is actually going above and beyond what is expected of you already. We have our job description laid out but the special awards are given when you go above and beyond what is required.”

Fire Officer (FO) Ericson Isaac, attached to the Basseterre Division recalled highlights during his 15 years in the Fire Services

“One of the fires I remembered clearly was when Redi-Fry burnt couple years back during the passing of a storm,” he said. “I was on duty for that call and we were out patrolling the area. While in the truck, I pushed my head through the window and immediately smelt smoke. I told the guys but they thought I was joking.

The fire in itself was a bit challenging, the entire area was flooded. When we located the hydrant, we discovered that the water in the area was off, so it took us a while to actually get in contact with the water department to get the water turned on. After much effort, we were able to put out the fire.”

O’Garro gave advice to anyone who wishes the join the SKNFRS.

“Any person who wants to join the organization should definitely have a love for rendering life saving service, with a high level of commitment and pride,” he stated. “He/she should be willing to put his/her life on the line for the safety of others.”

He further advised that current officers who want to excel in their job and receive the same recognition as those awarded “should take pride in what they do, be disciplined and diligent when performing tasks and give of your best at all times in the execution of your duties.”

A total of 31 officers were awarded. Fifteen were awarded for long service, 11 for 15 years of service and five (5) were chosen for the special awards category.