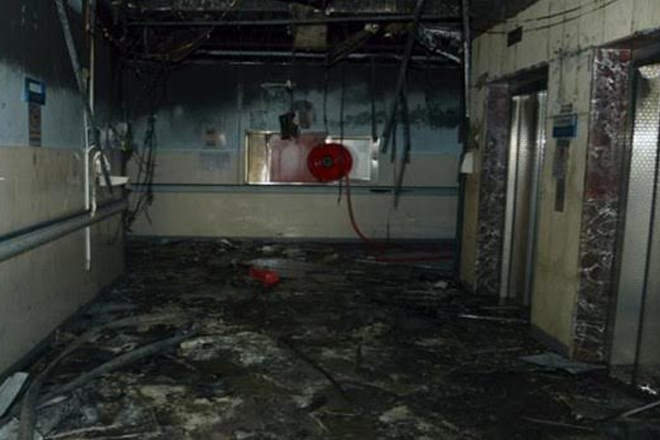 (Antigua Observer) A fire at a hospital in Saudi Arabia killed 25 people and injured more than 100 others as it ripped through the intensive care unit and the maternity ward before dawn, the Saudi civil defense agency said.

Details of the fire and its victims were scant, but photographs published on Twitter by the agency showed smoke and an intense blaze which appeared to have severely damaged the interior of the white-walled hospital.

The fire broke out at the general hospital in the southwestern port city of Jazan, the capital of the Jizan region, one of Saudi Arabia’s poorest areas, near the Yemeni border.

Saudi Arabia’s government-controlled al-Ekhbariya television interviewed a witness who said the cause of the fire appeared to be electrical, and that it swept through the hospital in just 3 minutes.

“We could hear the women screaming,” said the man, who was not named.

The 25 dead included one child, the television quoted the director of civil defense in Jizan, Major General Saad bin Al-Ghamdi, as saying.

It was the latest in a string of disasters at public facilities in Saudi Arabia this year, including the deadly crush at the haj pilgrimage that killed hundreds of worshippers.

The 107 injured on Thursday were transferred to other hospitals in the area. The fire was brought under control and an investigation into its cause was under way, the agency added.

A Ministry of Health spokesman was not available to comment.

Jazan is the focus of a $20 billion plan to develop the local economy by building an industrial complex that produces and uses oil products for manufacturing.

But some people commenting on Twitter suggested the fire was a result of official negligence and that the health minister should resign, although the identities of the accounts could not be verified.

“Does the health minister have the courage to submit his resignation after the fire at Jazan General Hospital? What disaster lies after this calamity?” tweeted one, whose account identified him as Mohammed Alsubaie, from Riyadh.

Criticism of Saudi Arabia’s ruling family is frowned upon, but the comments online pointed to other infrastructure accidents over the past year.

The deadly crush at the haj in Mecca in September killed 769 people, according to Saudi officials. Reuters calculations based on numbers provided by the pilgrims’ home countries showed the death toll was at least 2,070.

Two weeks earlier, 110 people died in Mecca’s Grand Mosque when a crane working on an expansion project collapsed during a storm, crushing pilgrims below. In August, fire swept through an oil workers’ residential compound in the town of Khobar, killing 10 people.

King Salman said on Wednesday Saudi Arabia would seek to diversify its sources of income and improve the efficiency of government spending as it strives to reduce its dependence on oil revenue, which has plunged since last year.

The kingdom is due to announce a budget and detailed roster of economic reforms on Monday.

Jazan has also been caught up in Saudi Arabia’s military intervention against Houthi rebels in Yemen this year. On Tuesday, Saudi authorities said they had shot down a ballistic missile fired from Yemen that was on a trajectory toward Jazan.