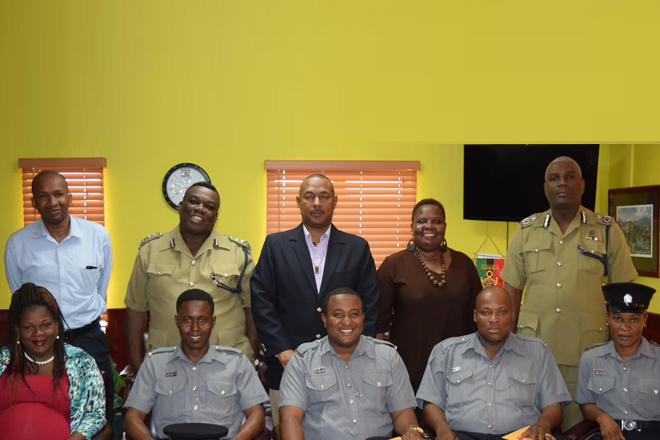 Five (5) Constables promoted to the rank of Acting Corporal

(RSCNPF): The Royal St. Christopher and Nevis Police Force is pleased to announce the selection and promotion of five (5) Constables to the rank of Acting Corporal.

The selection of these officers for promotion was the result of a transparent and competitive process in which all eligible Constables were encouraged to apply for consideration in the filling of vacant slots. As part of the process each candidate also appeared before an Interview Panel and was interviewed.

Commissioner of Police Mr. Ian M. Queeley congratulated the newly appointed Acting Corporals and reminded them of their responsibility. He said, “with this promotion comes added responsibility. You are expected to lead and perform in your new role, be the positive example for those under your charge, and we expect you to support your peers and the senior leadership.”

He added, “the morale of your officers will be important, but as important as that is…you will be expected to implement and enforce the polices laid down for good governance of this organization. Additionally, I strongly encourage you to recognize and reward your staff when they perform and encourage them …..but hold them accountable when they don’t, and be fair.”

Other members of the High Command also gave encouraging words to the newly appointed Acting Corporals.