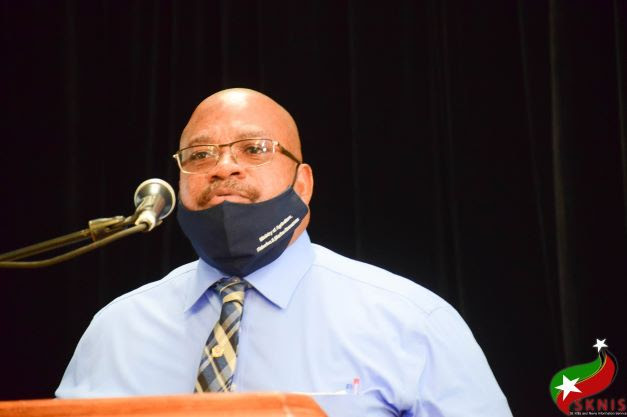 Basseterre, St. Kitts, September 29, 2021 (SKNIS):  The food truck vending site along North Independence Square Street in Basseterre is ready and operations will commence shortly, said Permanent Secretary in the Ministry of Agriculture, Ron Dublin-Collins, while providing the public with an update at the Prime Minister’s Monthly Press Conference held on September 28 at the National Emergency Management Agency (NEMA) Conference Room.

“The work is now complete, and this week we will see the setting up of the site in terms of the placement of the trucks in the area. So right now, the site is ready and we are installing the trucks as we speak. So, by Monday we hope to have an official start of the operations in that area,” said Permanent Secretary (PS) Dublin-Collins.

Mr. Collins outlined the work that was undertaken in preparation of the site.

“The work included but was not limited to the fumigation of the area. You will recall there was a large tree on that site and it has been cut and prepared so that it can accommodate the food truck business that is there,” he said. “The work also included the repair of the sidewalls, the installation of a new waste management system, and also the construction of bathrooms in the area. Gravel stones have been laid, a 1500 gallon underground tank was installed and security is also being addressed for the area.”

PS Dublin-Collins said that the work has been very extensive and several ministries collaborated to make the project possible.
Space has been provided for eight food truck vendors who once operated on the streets of Basseterre. However, Mr. Collins said that while there is an “increased interest in the area, the idea was to provide for those who were in the area at the time when the decision was made to remove the vendors” from Independence Square.

In late July, Prime Minister Dr. the Honourable Timothy Harris led a small delegation on a tour of the site. He was accompanied by the Permanent Secretary in the Office of the Prime Minister, Andrew Skerritt; Mr. Collins, and Chair of the Inter-Ministerial Committee on Street Vending, Austin Farier.

This move by the Government of St. Kitts and Nevis follows a decision to halt all street vending activity in the city center. Over the years, street vending has become a major area of concern as pedestrians were forced to walk in the busy roads as the number of vendors utilizing the sidewalks grew exponentially.