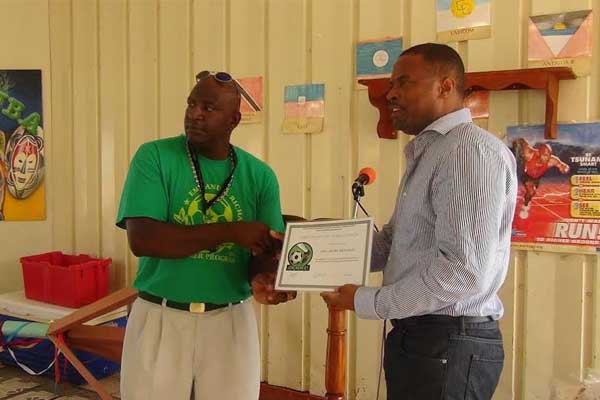 The 2014 edition of the Eddy Caines –Richards Football Summer coaching clinic, came to an end on Friday 25th July.

Richards noted that the clinic was incident free and stated that with the assistance of several local coaches, the children learnt a lot.

He thanked God and all of the sponsors and supporters who helped to make the clinic’s tenth year a resounding success.

Minister of Sports and one of the initial sponsors of the summer program, Hon. Mark Brantley lauded Richards on his initiative and more importantly on his persistence and endurance.

He vowed his support, along with that of Government, to the continued success of the program.

Public Relations officer of the Social Security Board, Walter Morton, addressed the gathering and quipped: ‘I love the fact that you are wearing green. Green is the colour of Social Security,’ he said.

He congratulated Richards on his firm but loving teaching techniques and applauded his positive approach to running the program.

He also admonished the children to put the lessons that they learnt, on and off the field, into practice, as they returned to their various homes and schools.

Mrs. Shirletta Byron, who spoke on her own behalf as a parent but doubled up as the Human Resources Manager of the Bank of Nevis, to speak on their institution’s behalf. She indicated the interest that was peaked in her two boys about the game and credited it to the workings of ‘Uncle EDDY.’

Richards later surprised the sponsors by giving each one of them a nicely created certificate of appreciation for the support extended over the 10 year period.

The most outstanding Footballers received Football related gifts as well.