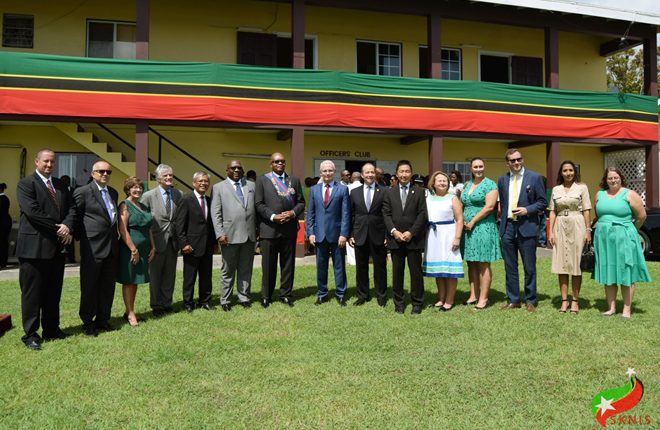 Basseterre, St. Kitts, October 10, 2017 (SKNIS): Despite the turbulent weather that disrupted the Independence Day Celebrations to mark St. Kitts and Nevis’ 34th Anniversary of nationhood on September 19, a number of visiting dignitaries graced the federation with their presence for the post activities on Saturday, October 07 and commended the Government for a splendid parade.

Prime Minister, Dr. the Honourable Timothy Harris, warmly welcomed the dignitaries and thanked them for celebrating with St. Kitts and Nevis.

“I want on behalf of St. Kitts and Nevis to thank all of our allies for coming out today in particular, to show solidarity with St. Kitts and Nevis on this historic moment in our journey post-colonial,” said Dr. Harris, during the Toast to the Nation at Camps Springfield. “I thank them because many of them had agreed to come and indeed some came for this special Independence anniversary, but as a result of the hurricane at that particular moment in time our Independence activities had to be postponed. And on this second go at it, if you will, several of them chose again to revise their schedules to be here in St. Kitts and Nevis to show solidarity and support for the Government and people of this young, beautiful nation.”

The Toast followed shortly after the Independence Day Parade held at Warner Park, which allowed citizens and residents to see members of the security forces and other organizations pay tribute to the nation.

Prime Minister Harris also thanked the general public for coming out to commemorate St. Kitts and Nevis’ 34 years of Independence, noting that “their display of patriotism has certainly moved and inspired hundreds of others.”

Immediately after the toast, Prime Minister Harris held four back-to-back bilateral meetings with the representatives from the Czech Republic, France, Japan and Panama. During their meeting, the French Ambassador complimented Prime Minister Harris for the splendour of the event, noting “it was a beautiful parade and everything was very nice, especially with the kids. I think we have to do the same thing in France to have kids included in everything,” he added.