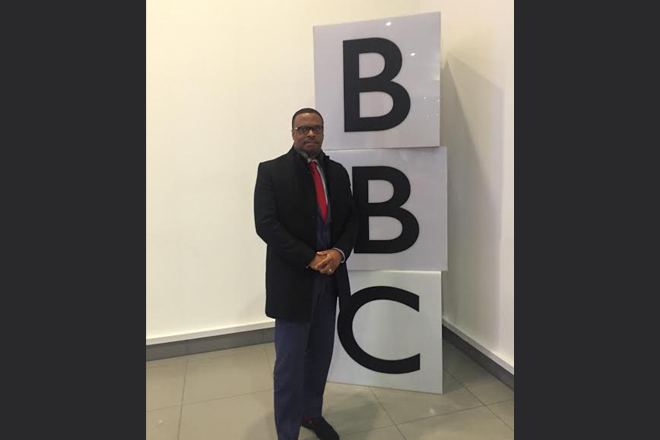 Foreign Minister Mark Brantley, currently on a tourism related visit to London, took an opportunity to speak with the BBC World Service’s flagship breakfast radio show ‘Newsday,’ on Monday morning. The brief but impactful conversation, heard around the world, focused on St. Kitts and Nevis’ drive to fully transform itself into a green economy as a means of combatting climate change, building long term resilience and improving the quality of life for its citizens.

Presenter, Mr Nkem Ifjeika, engaged the Minister on the issue of rising oceans and the existential threats posed to small and vulnerable islands-states in the Caribbean. Minister Brantley emphasized that for states such as St. Kitts and Nevis, climate change is not an academic exercise but a very vexing challenge. The Minister lauded the talks in Paris as a hallmark for island states and expressed hope for the mobilisation of resources to ensure monitoring, implementation, mitigation and adaption are secured.

In trumpeting some of the home-grown solutions in St. Kitts and Nevis, Minister Brantley underscored the development of geothermal energy on Nevis and the aim to be the greenest island on earth. The Minister contextualised the Federation’s ambition by seeking to place its green initiatives in the broader context of south-south cooperation – in particular with countries in Africa as well as others in the global south.

The Minister of Foreign Affairs welcomed the opportunity to access international media platforms, which he believes can play an important role in assisting national efforts to bolster the voice and efforts of small countries as they continue to champion the need for renewable energy solutions to counter the real threats of climate change to small island states.

Newsday is the biggest news breakfast show on the BBC. It is broadcast over five hours and is carried via the BBC World Service radio and on US public radio and local FM stations across Africa.

The recap of the interview can be heard at: http://www.bbc.co.uk/programmes/p03mlpb5