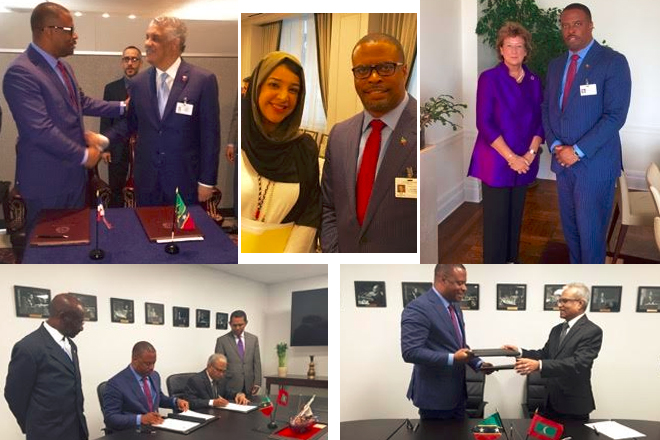 Yesterday, 21st September, 2016 marked a whirlwind day of diplomacy for St Kitts and Nevis Foreign Minister, the Honourable Mark Brantley, who is attending the 71st Session of the United Nations General Assembly in New York.

Immediately after, Foreign Minister Brantley attended the Group of Friends on Security Reform hosted by the German delegation where he engaged in high level and meaningful discussions on UN Security Reform.

UK Minister with responsibility for the Caribbean, Baroness Anelay, then hosted a working lunch for CARICOM Foreign Ministers. Minister Brantley and his regional counterparts exchanged views with the UK Government on a wide range of issues including the uncertainty surrounding Brexit. Minister Brantley was pleased by the announcement of Baroness Anelay that whatever developmental aid lost by the Caribbean from the European Development Fund (EDF) as a result of Brexit will be replaced by the UK.

After the luncheon, Foreign Minister Brantley participated in the Caricom/Japan Summit where matters of mutual interest were discussed. Japan has been and continues to be a long standing friend of St Kitts and Nevis.

In his quest to improve relations with as many of the UN Member States as possible, the Minister was pleased to journey to the Mission of The Maldives where he formally executed instruments to establish diplomatic relations between St Kitts and Nevis and the Maldives. Our two countries share commonalities including being Small Island Developing States (SIDS). The Foreign Minister of the Maldives was pleased to commit to widening and deepening the relationship between both our countries.

Following the signing, St Kitts and Nevis’ prime diplomat, Brantley accepted the invitation to a meeting between CARICOM and a high level delegation from the United Arab Emirates (UAE). Minister Brantley delivered warm greetings on behalf of the government and people of St Kitts and Nevis to the UAE delegation and pledged to deepen ties between our countries. The head of the UAE delegation used the opportunity to announce the UAE’s generous US$50 million developmental fund for the Caribbean.

Minister Brantley capped off an extremely long day by attending receptions hosted by Kuwait and by the UAE. The Foreign Minister used the occasion to thank the Government and people of Kuwait for their tremendous assistance to St Kitts and Nevis in funding critical infrastructure projects over the years.

The final event for Minister Brantley was an interaction between US Investors and African entrepreneurs on the margins of the US Africa Business Forum.

Minister Brantley is part of the delegation to the UNGA 71 led by Dr the Honourable Timothy Harris. He was accompanied on all interactions throughout the day by St Kitts and Nevis Permanent Representative to the United Nations, His Excellency Sam Condor.