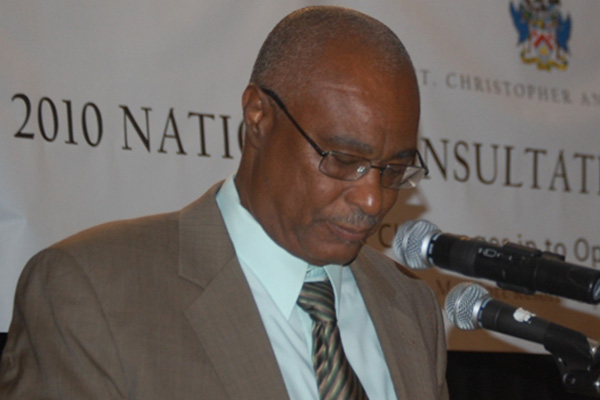 Former Nevis Premier supports initiatives to reduce the national debt, says there is no alternative to the land for debt deal

(CUOPM) – Former Premier of Nevis, the Hon. Joseph W. Parry is fully supportive of the Land for Debt swap initiated by the Federal Government and agreed to by his Nevis Reformation Party (NRP) Administration.

In an interview on Freedom Radio 106.5 FM’s “Good Morning St. Kitts and Nevis,” Mr. Parry, now the Leader of the Opposition in Nevis, lashed out at his predecessor, the Hon. Vance Amory of the Concerned Citizens Movement (CCM), for its antagonistic and non-cooperative stanch with the Federal Government of St. Kitts and Nevis’ Prime Minister the Right Hon. Dr. Denzil L. Douglas.

In relation to the use of lands in both St. Kitts and Nevis as one of the measures to reduce the National Debt, Mr. Parry said the Washington-based International Monetary Fund (IMF) gave technical assistance.

“The IMF was involved in every step of the way, in regards to what we were doing and the IMF understood that, and let me make this absolutely clear, that the Prime Minister of St. Kitts and Nevis (Dr. Douglas), had made a decision, his decision and the country’s decision, in terms of how we deal with the economy and the debt situation. I was aware of it and other persons in the Cabinet of St. Kitts and Nevis, they were aware of it. The Prime Minister decided on the land for debt swap situation and the IMF agreed,” Mr. Parry told the show’s host, Mr. Colin Sampson.

He said in relation to Nevis, there was nowhere for either his former NRP government or the present CCM government of the Hon. Vance Amory to go.

“I understand that Mr. Amory came up with a suggestion that Social Security funds could have dealt with the debt and bought the lands through the National Bank Arrangement with the Special Purpose Vehicle. Now the question that I ask myself is this, Social Security is not organised in any way to deal with that type of situation. It is not a financial institution. It is not a lending institution. It does not have a set of funds other than the people’s funds and there are laws restricting what the Social Security can do,” Mr. Parry pointed out.

He reiterated that he never so the possession of the lands by Social Security as an option.

“In fact I don’t even believe that Mr. Amory was serious about that being an option. In other words then and look at it from this point of view, both islands have government lands that can be made available to the public for sale, whether for housing, agriculture, whether for other investments and in that way you can do two things; you can reduce the debt and you can stimulate growth in your country,” Mr. Parry articulated.

He reiterated that Prime Minister Douglas was of the view that that was the best way to go and he agreed with him.

“Now it is very instrumental and very instructive to realise what happened, but it is absolutely clear that the Concerned Citizens Movement led by Mr. Amory also felt that it was the best way to go and whatever deal they tried to use to get this thing done through the back door, they sought to have the land swap done and at the same time they tried to blame the Nevis Reformation Party,” said Mr. Parry, acknowledging they must take responsibility for their action.

“They cannot blame the NRP and that they could have done differently so what I am looking  at, regardless of what is being said, the public both in St. Kitts and in Nevis now understand that the Nevis Island Government has shown quite clearly that this is the way to go,” said Mr. Parry.

He said the use of the land for debt swap to trigger the Motion of No Confidence by the UNITY opposition to bring down the Federal Government has been pulled from under their seats.

“Nevis and the Nevis Island Government have no leg to stand on to continue to be part of this Unity construct. It makes absolutely no sense. It makes no sense from a political position, it serves to undermine themselves. It makes no sense from the point of view of the people of Nevis, because what should be happening is that the two governments should co-operate,” said Mr. Parry.

The matter of the Motion of No Confidence is still to be heard in the High Court.