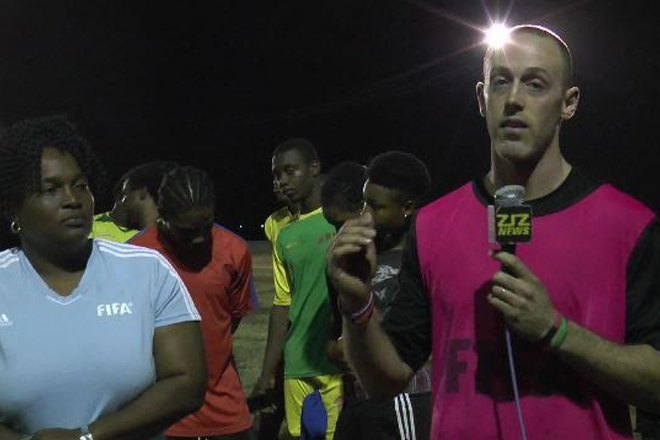 (ZIZ News) – The Sol Island Auto Conaree Football Club has received several pieces of equipment from one of its former players.

Ryan Borcyk, who is currently in St. Kitts and Nevis, made the donation following the team’s practice session on Wednesday evening.

He said a portion of the donation should assist the club’s youth team, noting “it’s very important that we perpetuate the programme and maintain the youth because that’s the future of Conaree and there’s not a better club on the island. They have done so much for me and I can’t thank them enough.”

In thanking Borcyk for the donation, Team Coach Lester Morris said it will definitely elevate the football programme in Conaree.

“I want to thank Ryan for this generous donation and as he said before, I believe that this will perpetuate the programme and push it forward. With all the youngsters that come here (Conaree Sporting Complex) on Saturdays and play the game barefooted, we can now see that there is something to look forward to and we are hoping that these boots and all the other pieces of equipment that we receive would really elevate the programme here at Conaree,” Morris stated.

The donation included 50 pairs of football boots for senior and youth players, cones, bibs and footballs.