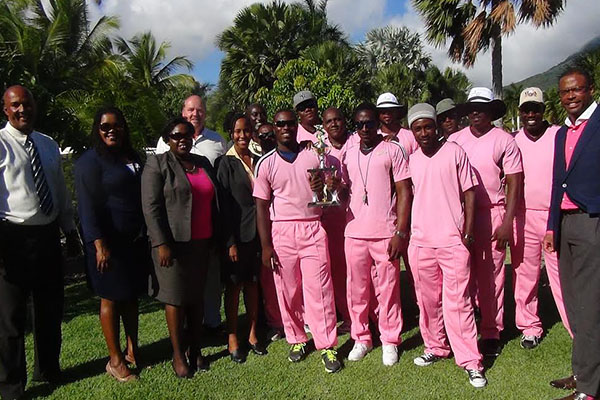 A jubilant Four Seasons Cricket team celebrated in grand style on Thursday 8th May after accepting the grand trophy which designates them as champions of second division Cricket on the island of Nevis for the year 2014.

The powerful team which comprises of quite a number of current and past representatives of the Nevis senior team, virtually brushed all opposition aside, even though they were squeezed right down to the wire in the grand finals by the Charlestown Secondary school boys.

A brief but impressive handing over ceremony was held on the greens at the prestigious resort and was witnessed by the General Manager and several managers who took time from their busy schedules to share in the joy of the cricketers.

The ceremony was chaired by President of the Nevis Cricket Association, Keith Scarborough who warmly congratulated the winning team and reminded those present, that at the opening ceremony for the local league, Manager of the team, Mackay France had made the bold statement that his team would eventually have the trophy displayed at their Human Resources Department.

Minister of Sports, Hon Mark Brantley also had warm commendations for the team and teased that it looked like a team he could make, as he ribbed his good friend ‘SOCA’ who was dubbed by France as the ‘Daddy of the team.’

Mackay France also had his team demonstrate the game of Cricket for the benefit of those managers who were not too familiar with the sport.  During this period, Junior Minister of Sports Hon Hazel Brandy –Williams bowled a delivery to Xavier Cornelius and pulled off a stunning caught and bowled feat, much to the delight of the spectators.  Minister Brantley, not to be outdone, later uprooted the middle stump of the same batsman, as he left alone what may well have been a doosra.

A moment of silence was also observed on the tragic passing of Alec Browne and Nigella Browne in a road accident which occurred earlier in the week.  Alec previously worked at the Resort and Nigella was the sister of the Captain of the Four Seasons’ team, Dennison Browne.

The grand presentation of the trophy was made by Mrs. Brontie Swanston-Hendrickson who represented her institution and sponsors of the trophy, The Bank of Nevis.

The Marketing Officer eloquently congratulated the team and pledged the institution’s continued commitment to the general development of the game on the island.

General Manager of the resort Mr. Sven Wiedenhaupt gleefully accepted the trophy and promptly presented it to the team.

Later, all present joined in a grand toast to the team as they shared in glasses of champagne and apple cider.