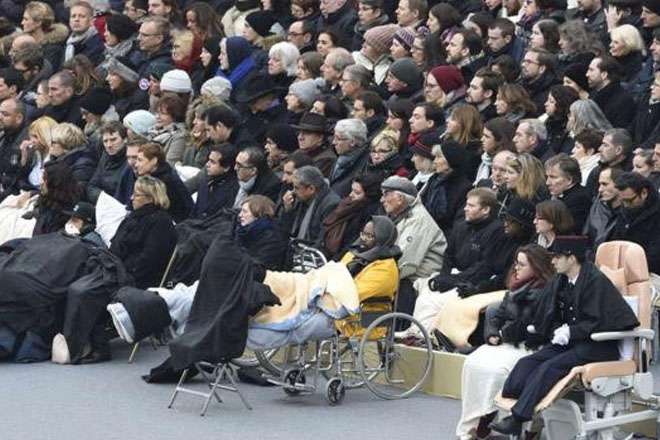 (BBC) France has held a national memorial service for the 130 people who died in the Paris attacks two weeks ago.

Some 2,600 people attended the service in central Paris, including President Francois Hollande, survivors of the attacks and victims’ families.

A minute’s silence was held and the names of all the victims read out.

Attackers with assault rifles and suicide belts targeted a number of sites in the capital. Islamic State later said it was behind the assault.

Some of the survivors who attended were in wheelchairs, while members of the fire and ambulance services wore uniforms for the 45-minute ceremony in the courtyard of the historic Les Invalides complex.

In his speech, President Hollande said France would “do all it can to destroy this army of fanatics”.

“It will operate relentlessly to protect its children.” he said.

He vowed that France would respond with more music, concerts and sporting events, after some of the attacks targeted a concert venue and a stadium.

Among those attending the service were the parents of British victim Nick Alexander, who said that they were now “intrinsically linked” to those who had also lost loved ones.

“The outpouring of love from around the world has been a great comfort to us and makes us even more proud to have had Nick as our son,” they added.