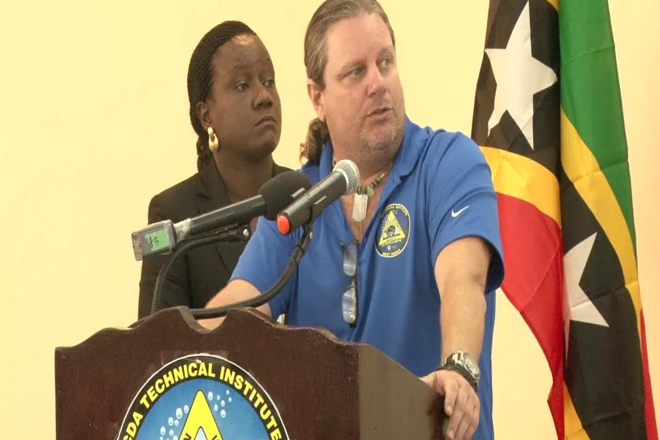 (SKNIS): Local divers and tourists, who become ill with decompression sickness or what is known as the bends, can get free treatment in a hyperbaric chamber here in the Federation of St. Kitts and Nevis. This service is available at the Commercial Diving Academy Technical Institute of the West Indies (CDA-WI) on Bay Road, Basseterre.

CDA-WI currently has two hyperbaric chambers on island and at the August 27 inaugural graduation ceremony of the learning institution, Deputy Prime Minister and Minister of Education, Honourable Shawn Richards, emphasized the significance of this.

“From zero hyperbaric chambers to two in 2016 … Divers from around the world can now come to St. Kitts and Nevis to enjoy our tranquil, inviting waters without the fear of succumbing to decompression sickness “the bends” without having any hyperbaric chambers around,” he said. “Essentially, St. Kitts and Nevis is now fully open for business to divers!”

The bends, which is also known as Caisson disease, occurs chiefly in scuba divers when dissolved gases (mainly nitrogen) come out of solution in bubbles and can affect just about any body part including joints, lungs, heart, skin and brain. If not addressed rapidly, this can result in severe pain, paralysis, aneurisms and in the extreme cases, death.

Betty-Ann Gilbert, who is assisting with the logistics toward the full establishment of the CDA-WI, revealed that since the institution commenced limited operations on February 6, 2016, two residents have received free emergency treatments in one of the hyperbaric chambers.

“We have temporarily set up on Bay Road, and we have one operational hyperbaric chamber on standby for emergencies, that is turn-key and ready to go,” Captain Black said. “In the future as we continue to do our construction (of the campus), near the Coast Guard at the Old Sugar Warehouse, we’re going to have a complete hyperbaric medical centre and we’ll have diving chambers for diving accidents, so when we get done, we’re looking to have around 14 chambers on site.”

According to the website of the Hyperbaric Wellness Centre (www.hyperbaricwellnesscenter.com) located in Tennassee, USA, hyperbaric treatment costs in hospitals in the United States can range from US$750 – US$900 – US$1,200. The length of treatment would depend on the injury, and the depth of water, and the time spent in that depth.

“Citizens of St. Kitts and Nevis, if they have a diving accident, and decompression problems, then yes, we treat the citizens and the tourists – related to the [diving] business on an emergency basis, free of charge,” Captain Black said. “If they have a diving accident or illness, they would report to their hospital and then the hospital would determine that it’s a decompression sickness, then they (hospital staff) would reach out to CDA-WI and the patient would be transported to CDA-WI’s facility and we would commence decompression treatment.”

A Memorandum of Understanding (MOU), which was signed between the Government of St. Kitts and Nevis and the diving school in December 2015, outlined that the school would also provide five full scholarships to residents. In addition, the MOU states that free quarterly diving training would be given to fishermen who are recommended by the local Fisheries Department and the Coast Guard Unit of the St. Kitts-Nevis Defence Force.

“We’re doing several things for outreaches, and I’m looking at probably at the middle of 2017, we’ll be in position with the new facility to be able to start bringing scholarship candidates. We’ll weigh heavy on the Maritime Affairs and the Coast Guard to pick these candidates,” Captain Black said. “Then we’re going to blend them in with our class to give them an opportunity under the scholarship to get the training to be able to go to work abroad also.”

Fees for courses at the school range from US$350 for Open Water Diver Certification to US$31,500 for Unrestricted Surface Supplied Air Diver Tuition, which has a duration of 16 weeks.

The inaugural commencement ceremony of CDA-WI saw 50 commercial diving graduates receiving their diving qualification. As outlined by the Deputy Prime Minister, CDA-WI’s accreditation status is accepted at national and international levels. CDA’s students can earn certifications from the Association of Commercial Diving Educators, the Association of Diving Contractors International, the Diver Certification Board of Canada, the National Center for Construction Education and Research, the American Petroleum Institute, the American Welding Society, Divers Alert Network, and HAZWOPER Environmental Training. Additional information can be obtained on the website www.cda.com.kn.