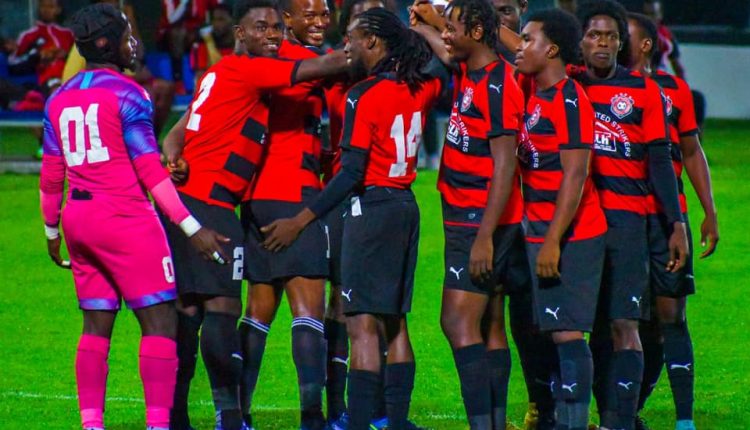 Basseterre, St. Kitts, October 21, 2022 (SKNFA) — It’s official: S. L. Horfords St. Paul’s are the 2021 Super Six Tournament champions after they dismissed SOL IAS Conaree FC 5-1 in game 2 of the Super Six finals Thursday night at the Warner Park. St. Paul’s rained down goals on Conaree, starting off with the tournament’s MVP Keithroy Freeman in the 21st minute, followed by Kalonji Clarke in the 41st minute to give St. Paul’s a 2-0 lead at halftime. In the second half, it was more of the same: Freeman scored St. Paul’s third goal with a brilliant through pass but were pegged back a bit with an own goal by Petrez Williams; putting Conaree on the board in the 66th minute. Perez made up for that mistake when he scored a stunning free kick in the 81st minute, only for Freeman to score his hat trick with the 5th and final goal of the match in the 88th minute. After the match, the Manager of St. Paul’s Derionne Edmeade told reporter Virgil Hodge, St. Paul’s strategy to win the championship was to soak up the pressure and hit their opponents on the counterattack.

“All we had to do, was withhold everything that they do, stay focused, and when all that pressure wears down, St. Paul’s were ready to jump up again,” an elated Edemade said. He suggested that they could not afford to delay their celebrations to after game three on Sunday, noting it was important to win game two last night and seal the series. “Tonight, we took advantage of the opportunities that we got. In the first game, both teams missed a lot but tonight, St. Paul’s spent some money on some nice champagne. We couldn’t put these back on ice…we could not do this on Sunday. It’s sweeter today,” Edemade said.

For Coach Al Richards of Conaree, his team failed to score early and hence lost the match. “I told the players, this is a final, if we don’t score we can’t win. Goals win games. We didn’t score, St. Paul’s scored their chances,” he said. He congratulated St Paul’s and thanked his team’s sponsors for supporting them all the way to the finals.

This marked the end of the 2021 SKNFA Premier League and back-to-back titles for St. Paul’s. With that win, St. Paul’s walk away with $50,000 in cash prize and several individual prizes as well. Other prizes were: