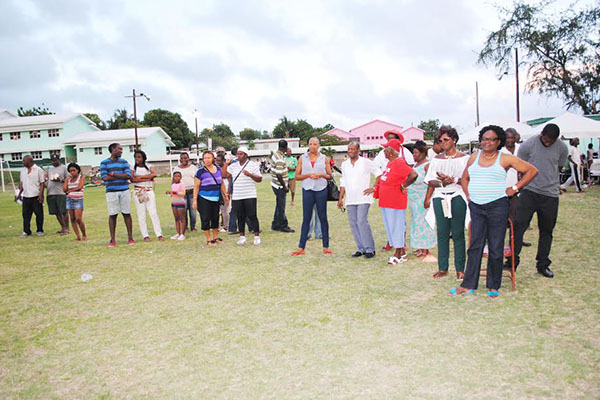 Basseterre, St. Kitts — Parliamentary Representative for Central Basseterre, Labour Party’s the Hon Ms Marcella Liburd, has once again demonstrated the importance of families getting together with the hosting of a successful Fun Day at the Gardens play field on Good Friday April 18.

The sixth edition of the Fun Day that started in 2009 was one that attracted hundreds of residents both young and old from the constituency and the neighbouring villages, and was briefly graced with the presence of St. Kitts Nevis Labour Party’s Political Leader, and Prime Minister of the Federation, the Rt Hon Dr Denzil Douglas.

“Over the years it has been growing in terms of interest and in terms of support,” commented Hon Liburd. “This year we had more people than last year. We had our biggest turnout and to entertain them we had added items into the day’s activities.”

The Gardens had started attracting people from as early as nine in the morning when children started flying the traditional Easter kites even before the actual kite flying competition had started, and the grounds were not vacated until after 9:30 pm when the last competitive game, basketball came to an end.

“The children had the Easter surprise baskets, and we had the egg hunt,” observed Hon Liburd. “Children were very excited about that. We were able to give out Easter eggs to the children.”

Children had a whale of a time as they had a bouncing castle, and a platform with an open chute slide that was installed for the activities. Most of the children had kites of all manner of designs and sizes and they went on flying them even after the judged competition was over.

They however met their match in 58-year-old Steadroy Delaney whose kite was made out of a Labour Party 2014 calendar, and he competed with the youngster as his kite sometimes soared higher than theirs. He said that since he was a small boy he always made things differently.

Easter foods, salt fish, jonnie cakes and other delicacies and drink were in plenty and the food booth was well patronised. By late afternoon all the food had been consumed as people mingled around the food booth while they socialised with their friends.

After all the field games were over, seven of the eight Miss Labour Queen Pageant contestants were introduced by Ms Sharon Rattan. Ms Lesana Liburd for Number Two was widely cheered by the huge crowd that had thronged the area near the main stand to cheer them.

Incidentally as Ms Rattan was introducing contestant for Number Six, the Prime Minister the Rt Hon Dr Denzil Douglas, who is the parliamentary representative for Constituency Six joined the surging crowds. He was joined by host Hon Marcella Liburd as they stood to watch the hat parade.

After the hat parade, Prime Minister Douglas demonstrated his humility by joining persons on the stands to watch events on the field. While at the stand he purchased a bag of peanuts and started shelling them, and chewed them methodically as he occasionally talked to people who stopped to greet him.

Other personalities who came around were Commissioner of the Royal St. Christopher and Nevis Police Force Dr Celvin G. Walwyn who was mobbed by the old and the young and more so by youths from the McKnight area, and Labour Party Candidate for Constituency Three, Mr Konris Maynard.

“It went on extremely well, and I want to thank all those who took time off to celebrate the coming together of communities with us,” said Hon Liburd. “I think all in all we had a very exciting afternoon and I know everyone went away with some enjoyment from it.”