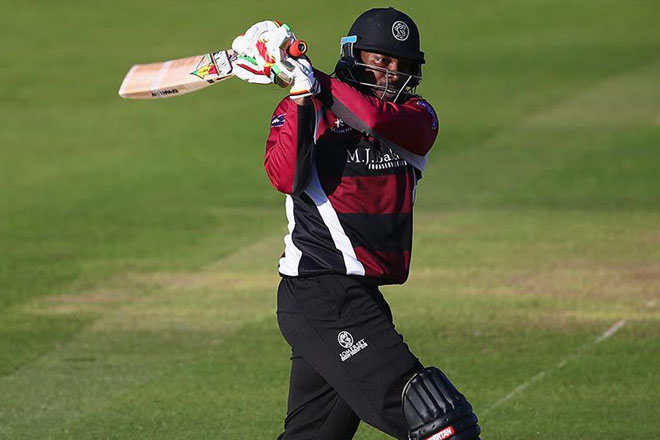 Cricinfo — Chris Gayle took his run tally in three NatWest T20 Blast innings for Somerset to 328 as his side beat Hampshire by eight wickets in front of a sell-out 6,500 Taunton crowd. The hosts reached a modest target of 168 with nine balls to spare, Gayle blasting an unbeaten 85 off 49 balls, with eight sixes and four fours, and Peter Trego 51.

James Vince cracked an unbeaten 64 off 53 balls to help Hampshire to 167 for 3 after winning the toss, Sean Ervine contributing 30 at the death. But it never looked likely to be enough in excellent batting conditions.

The Hampshire innings featured only two sixes on one of the smaller grounds on the county circuit. Both were hit over deep square, by Owais Shah in the 14th over and Sean Ervine in the 19th. By the end of the six overs of Power play the visitors were 51 for 1, having just lost Michael Carberry for 20 to a well-judged catch by James Hildreth on the square-leg boundary off Sohail Tanvir.