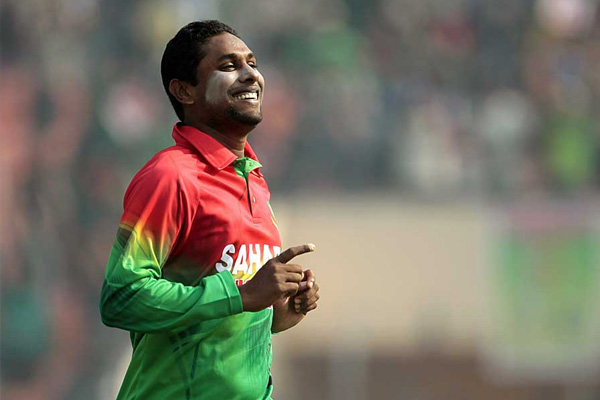 (Sports Page) Even as the first Test meandered to a draw, Bangladesh had plenty of reasons to celebrate, not least among them Sohag Gazi’s performance on the final day. A Test hat-trick, only the second by a Bangladesh bowler, gave him a singular place in cricket history – he became the first cricketer to score a hundred and take a hat-trick in a Test. That wasn’t the only record he claimed.

When Mushfiqur Rahim managed to latch on to a rebound off his chest, to get rid of BJ Watling off the third ball of the 85th over, Gazi became only the third player in this decade to score a hundred and take five wickets in a Test, after R Ashwin and Shakib Al Hasan.

Having taken two wickets off successive balls in that over, Gazi then went on to complete a hat-trick, courtesy a one-handed catch at first slip by Shakib, who dived forward to catch the ball close to the ground.

The early finish to the game on the fourth evening meant that the possibility of rain loomed over the final day, but the weather stayed clear. New Zealand, however, began the fifth day slowly. They were consolidating and, with Peter Fulton at the crease, they achieved that. Fulton kept the Bangladesh spinners at bay in his own way, with the bat coming down from his 1.98 metre frame and defending the ball low to the ground. He scored 59 runs in more than three hours, adding 101 for the second wicket with Kane Williamson.

Fulton fell leg-before to Gazi in the second hour of play, and was followed by Williamson who was out after adding 51 runs with Ross Taylor for the third wicket. Williamson made 74 off 150 balls, with two fours and a six, but was out to a freak dismissal: his fierce pull got lodged between Anamul Haque’s thighs and the short-leg fielder held on to complete the catch.