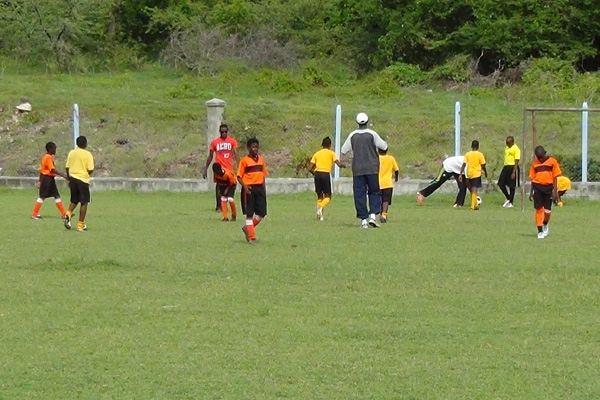 (Sports Page) There was no official ceremony and so the 2013 edition of the Giant Malt Primary School Football league, got off to a quiet start.

The action got underway on Wednesday 30th October at the Bath Village Playing field. Among the officials on hand, were Sports Coordinator within the Ministry of Sports, Michelle Sutton and Giant Malt representative, Noah Mills.

There were three matches played in the first round of matches.

In match one, a B division fixture, the Ivor Walters Primary school easily rolled over their Jocelyn Liburd counterparts with a score line of 8 goals to nil.

For the IWPS there were 2 goals each for Trevon Dunrod, Damari Mitchell and Roberto Chapman and 1 goal each Vibert Stepens and Dakari Browne.

In game two, an A division fixture, Charlestown Primary defeated the Elizabeth Pemberton Primary school with a score line of 6 goals to 1.

For the CPS team there were 2 goals each for Dejal Myers and Jalden Myers and 1 goal each for Kenaicy Dorset and Aljoreece Gerald.

For the EPPS team, the lone goal scorer was Khaleel Glasgow.

The final game of the afternoon was a B division match u between CPS and EPPS. The Charlestown Primary School won quite comfortably with a scoreline of 3 goals to nil.

The goal scorers for the CPS team:
2 goals for Datryel Stanley
1 goal for Jahiem Gerald