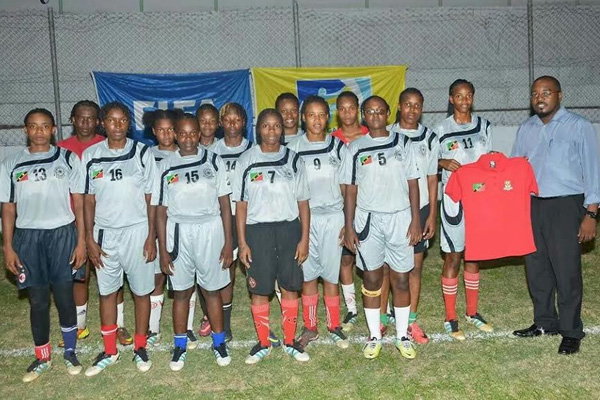 Dr. Gilbert said he was approached by the team’s goal keeper, a constituent, who asked him for assistance with providing uniforms for the team who were about to travel to The Turks And Caicos for the qualifiers for the Caribbean Football Union’s Women’s Caribbean Cup.

“I am pleased to have been able to assist these talented young ladies of the Federation in this competition, providing them with some uniform shirts and some gloves for the goalkeeper,” he said.

“I understand that they have been doing quite well. Just as I mandated them to win big for St. Kitts and Nevis I understand that they have been winning their games quite big in Turks and Caicos. I got involved in this venture after discussion with one of the players. One of my constituents is the goalkeeper for the team and she explained the difficulties they’ve had in terms of getting sponsorships and so forth. So I was able to commit to her to do what I can to assist them. And I was able to, in partnership with other persons to get some of these materials for them,” he added.

So far the SKN women have done well winning their first match on Friday against the Cayman Islands 5 – nil. The second match on the 25th against Turks and Caicos ended in a similar fashion with the SKN women beating TCI 4 – nil.