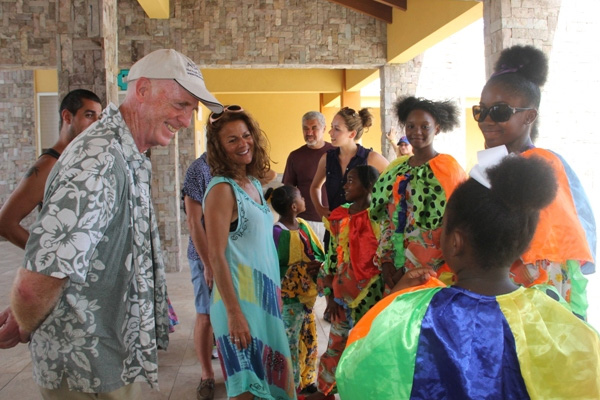 NIA Charlestown Nevis — At least three members of the Globe to Globe cast who performed William Shakespeare’s Hamlet at the Nevis Performing Arts Centre on September 04, 2014, have fallen in love with Nevis and described the island as one of the best places they had visited as they travelled the world.

“Nevis is absolutely divine. Personally I have wanted to come to the Caribbean for a very long time and this is my first time and it’s kind of everything I have expected and more. When we arrived in Nevis we came up the steps of the theatre and we had about eight or nine dancers/ girls in the clown costumes and they were dancing one of the traditional dances and it was great…They told us they had performed in the carnival not long ago and it’s great because we get to see a better view of culture and that was fantastic for me, a great welcome,” he said.

Khan explained that the group’s visit to Nevis was part of a two-year world tour which was on its Caribbean leg.

“We came here purely with the play itself, as a two-year tour to every country in the world…One of the best things is we started in Northern Europe and we moved to Eastern Europe and went down through there. We are still not completed in that that part of the world but then you get the joys of seeing every different continent. We did Europe the last leg.

“So we have just gone through Central America and we are doing all of the Caribbean Islands and every single one has its own kind of life to it, individuality and this is by far one of my favourite places,” he said.

However, Leong spoke of Nevis as a little bit of paradise.

“For me this is just a little bit of paradise as how I would imagine the most tranquil and beautiful beaches and palm trees. It’s just lovely and everyone’s been so warm and so excited to have us and …we are really happy to be here.

I am really happy we got to come here and …it’s just amazing because I knew very little about this part of the world before this tour and it’s just lovely. We don’t stay here nearly as long as we would like to. I am just happy we can take a little bit of it with us as we travel on. It’s great,” she said.

Hayat on the other hand, spoke of the island’s tranquillity but also registered his love for Nevisian cuisine.

“It’s the most peaceful, serene, tranquil place, I think, by far the most tranquil place I have ever been and it’s so re-energising. We are staying at the beautiful Oualie Beach Resort and it’s just stunning and so peaceful. So I feel very, very, very lucky to be here and very lucky to have this tiny snatch of what is a beautiful and humbling and inspiring island. So thank you for having us.

“I think one of the most wonderful things I have experienced here, apart from the stunning natural beauty and the generosity and warmth of the people, is incredible food. We have had such amazing food since we have been here and it is one of the ways, for me personally, that you can chart the journey which we have had so far, through all the countries that we have been so far, is the national dishes of the places that we have been in. I think your memory, just as people, we hold such affection for food and you can remember places by what you have eaten and I think we have had such great food here, that I would love to just come back and it sounds really gluttonous, but just to stay and eat,” he said.