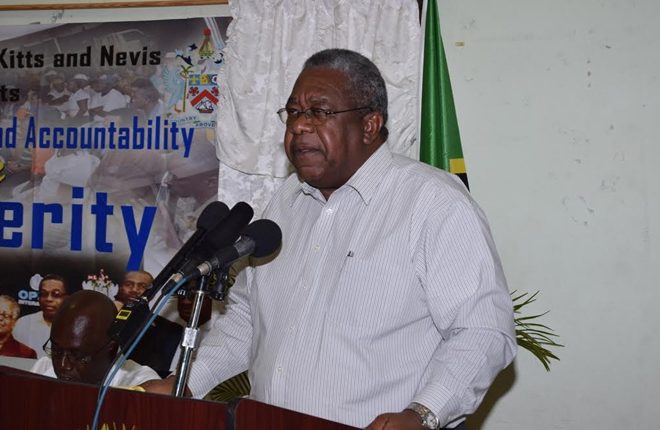 Good governance and prosperity are key components of any government, says Minister Byron

(SKNIS): As government continues along the path of Good Governance and Accountability for Prosperity with the aim to be more transparent, the Honourable Vincent Byron Jr., Attorney General, has described the theme as one that is of great importance, as it is a key component in the proper running of any nation.

Speaking at the recently held “Good Governance and Accountability for Prosperity” Town Hall meeting on Tuesday, January 31, at the Cayon Community Centre, Minister Byron explained that the government has been practical in its quest to be accountable to the people.

“We showed the people of St. Kitts and Nevis that things are going good and that we had put together a prosperity agenda that each and every one of us could be proud of,” said Minister Byron. “We showed where we had managed significant economic growth in the country, where we have had a number of programmes that make us better as a people, whether it is in health, where we would have now for the first time ever in our country be able to treat cancer patients in a unit at the Joseph N France General Hospital, or where we would be able to treat those who are mentally challenged in a day care centre or a halfway house where regularly we could look after our people.

“We see what is happening in sports in that our representative [the Honourable] Shawn Richards is making sure that our sporting facilities are upgraded, whether in the form of lights for our young people to play or whether so that we can continue to do well in terms of bringing in as it was international sports and international players,” he said.

Minister Byron commended his Cabinet colleagues for continuing along the path of transparency and accountability, and said that the Prosperity Agenda of the government is very solid, as there are signs of strong economic growth.

“In 2017, having stabilized the country and having given the people the confidence that we will now have the jobs and the projects unveiled to be able to have us as it was – be better as a people, we now have to look at what this Team Unity movement began as,” said the Attorney General. [It began as] “one that objected most strenuously to breaches of our Constitution in our country, to areas, and to things in which there was a total disregard for the rule of law for the administration of justice and what was just basically decent in our country.”

He noted that the onus is upon them as ministers and as a government to insist that everyone in the federation follows the rule of law and the administration of justice, including themselves. He noted that this is what good governance stands for. He said that the Team Unity movement was based on two principles, namely, restoring democracy for the people of St. Kitts and Nevis and to have a prosperity agenda, adding that he will ensure that such principles are upheld.