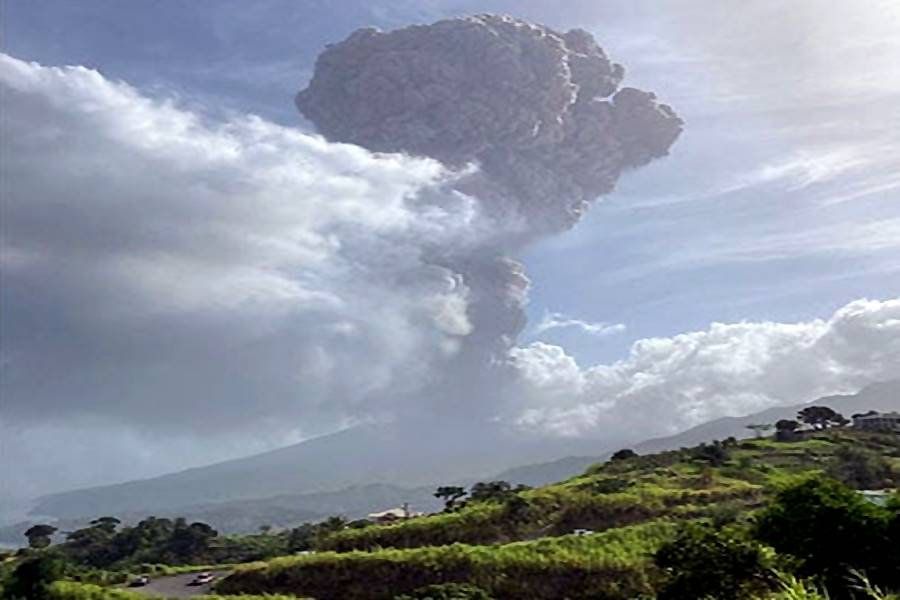 Basseterre, St. Kitts, April 11, 2021 (SKNIS): In being its brothers’ and sisters’ keeper, the Government of St. Kitts & Nevis has extended a helping hand in donating over $1 million dollars and other humanitarian aid to assist the Government and people of St. Vincent and the Grenadines in the wake of the eruption of the La Soufrière volcano, which erupted on April 9 after being dormant for over four decades. It last erupted in April 1979 with no casualties as the local population was evacuated. However, in 1902, the people were not so lucky when the deadly volcano erupted killing about 1,600 people, most of them indigenous Kalinagos.

Prime Minister of St. Vincent and the Grenadines, Dr. The Honourable Ralph Gonsalves, has called for calm.

“I want to urge all our people to be calm—do not panic,” he said at a news conference. “We will come through this stronger than ever.”

With two explosive eruptions with plumes of ash and smoke billowing up to eight kilometers on the Friday morning of April 9, 20, 000 people fled the danger zone (especially from Chateaubelair, a town on the foothills of the volcano) from the ferocity of the volcano and are now displaced and in need of help.

An emergency meeting was convened on the day the La Soufrière spilled its guts by St. Kitts & Nevis National Disaster Mitigation Council with officials from the public and private sectors to mobilize support for the Caribbean nation, which is a member of the Organization of Eastern Caribbean States (OECS) and the Caribbean Community (CARICOM).

Subsequent to the meeting on April 10, Prime Minister of St. Kitts & Nevis, Dr. The Honourable Timothy Harris, announced a package of assistance to the Government and people of St. Vincent and the Grenadines, which includes financial assistance in the sum of EC $1 million to assist with the evacuation and resettling of citizens and residents from the danger zone; welcoming up to 300 evacuees to the shores of St. Kitts & Nevis; providing human resources through the Regional Security System (RSS) recruited from St. Kitts and Nevis Defence Force and the Royal St. Christopher and Nevis Police Force to support humanitarian, technical and peace-keeping efforts on the ground in St. Vincent and the Grenadines; and contributing US $20, 000 towards the Special Emergency Assistance Fund of the Caribbean Disaster Emergency Management Agency (CDEMA) in order to bring immediate relief to St. Vincent and the Grenadines and support its logistical operations. The National Emergency Management Agency (NEMA) has been tasked with coordinating the national response to the Needs List provided by the Government of St. Vincent and the Grenadines. The list includes, but is not exhaustive, cots, blankets, and peripheral water tanks.

“Our prayers are with the Government and people of St. Vincent and the Grenadines at this most challenging time,” Prime Minister Harris said.

Speaking at a press conference on the day of the eruption of the La Soufrière, Prime Minister Gonsalves said: “Amazing on this dangerous road to Jericho, we have the Good Samaritans. It brings home that we are one Caribbean family.”