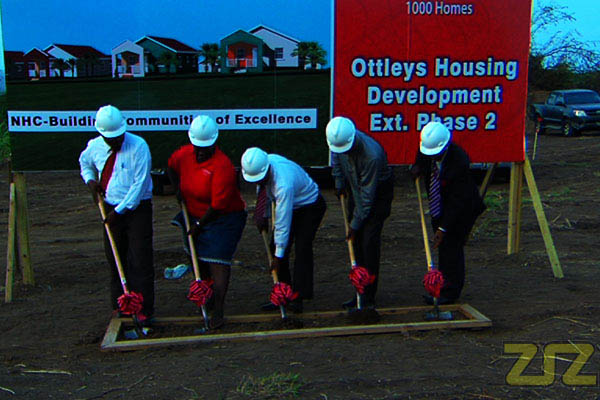 ZIZ News – The Government of St. Kitts and Nevis is working tirelessly to keep its promise of constructing 1000 homes as part of its “New Habitat – Independence 30” housing initiative.

The Federation’s Prime Minister, the Right Honourable Dr. Denzil Douglas and his Deputy and Housing Minister, the Honourable Dr. Earl Asim Martin joined employees of the National Housing Corporation, other government officials and residents of Ottley’s village and surrounding areas for the official groundbreaking ceremony of another batch of affordable homes under the Habitat 30 Independence 1000 Programme.

During his remarks, Minister Martin said he was proud that the housing corporation and his government by extension had embarked on a housing revolution.

He said his administration was pleased to further develop the housing programme that was created by former labour party leaders.

“The policies of this government are not dependent on any individual. The policies are polices of a labour government and these policies started long before we were here as the Chairman of the National Housing Corporation indicated. The Laboutr Government of Bradshaw, of Southwell, of France, St. John Payne started the whole revolution in housing and this labour government, under the leadership of Dr. Denzil Douglas is continuing this housing revolution for the people of this country.”

During the ceremony, General Manager Rawlins gave an update on the New Habitat – Independence 30” housing programme.

She said, “We started in March in Stone Fort Estate Yard. We moved to Fig Tree which we are now building, those of you who had the opportunity to visit High Point in Fig Tree would see the houses that we are building there. We have now started houses in Green Acres Halfway Tree where we are building 40 homes. We are now also looking forward to La Guerite Housing where we will build town houses. We launched Pine Garden Horizons which we are building 62 dwelling units and we’ll move on from here to Saddlers, to Estridge, to all over the island where we are going to actually be constructing these homes.”

Rawlins then said there is a unique element to the houses that are being constructed.

“The communities that we build will divert from the usual NHC homes to having multi-facade homes so, in the 20 homes that we build here, you will find not that your house is exactly like the house next door but we will make sure that each house has its own facade.”

The “New Habitat – Independence 30” homes at Ottley’s Housing Development will each feature two bedrooms, one bathroom, and a combination of living, dining, kitchen and laundry facilities.