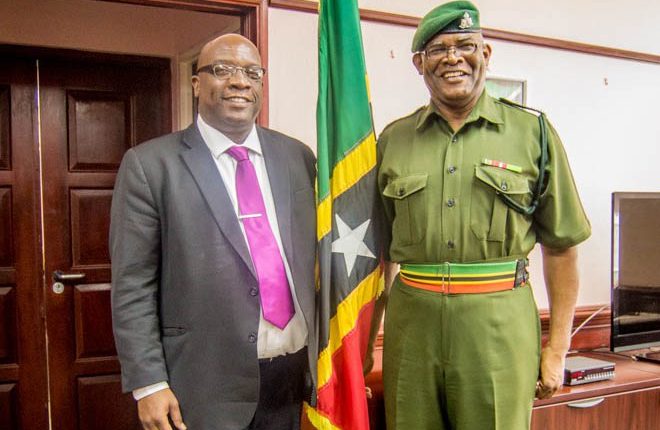 (PRESS SEC) – Prime Minister and Minister of National Security, Dr. the Honourable Timothy Harris says the Government of St. Kitts and Nevis is satisfied and impressed with the ongoing, collaborative operations that are being conducted by the St. Kitts-Nevis Defence Force, the Royal St. Christopher and Nevis Police Force and other partner agencies in the national security framework.

“Exceptional operational, strategic and tactical operations are proactively being done in the interest of citizens and residents’ safety, which my Team Unity administration recognizes is imperative to protect, in order to advance the emotional and economic well-being of the people who live, work and invest in our beautiful country,” Prime Minister Harris said today, Friday, July 21st, 2017.

“I thank the people for their overwhelming support for the Government’s robust efforts to maintain law and order in our country. We will use every law, every instrument, good advice and every resource available to make our beloved country the safest small island state in the world. We will not be weary in doing good for our country,” the Honourable Prime Minister added.

To further this goal, a recent Proclamation by the Governor-General, His Excellency Sir S. W. Tapley Seaton GCMG, CVO, QC, JP, granted enhanced powers to the Defence Force for the next six months in accordance with Section 7 of the Saint Christopher and Nevis Defence Force Act. The Act came into force 20 years ago on July 18th, 1997.

Section 7(1) of the Act states: “The Governor-General may, acting in accordance with the advice of Cabinet, call out the Defence Force for service in aid of the civil powers for a period not exceeding six months, with their arms and ammunition, where it is deemed that the resources of the civil powers need to be augmented.”

The St. Kitts-Nevis Defence Force has been called out before; for instance, in 2011, then-Governor-General Sir Cuthbert Montraville Sebastian issued an “Instrument for the Call Out of the Defence Force in Aid of the Civil Powers.”

That Instrument stated in part: “I, CUTHBERT MONTRAVILLE SEBASTIAN…in exercise of the powers vested in me by section 7(1) of the Saint Christopher and Nevis Defence Force Act, DO HEREBY, as from the 13th day of September, 2011, call out the Defence Force together with its arms and ammunition for service in aid of the civil powers for a period not exceeding six months.”

As at September 13th, 2011, twenty-seven (27) homicides had already been committed in the Federation for the year. Twenty-seven (27) was back then the record high for homicides in the Federation during a one-year period (2009). The 2009 record was broken in 2011 when 35 homicides were committed in St. Kitts and Nevis. That record, which occurred under the Denzil Douglas regime, still stands.