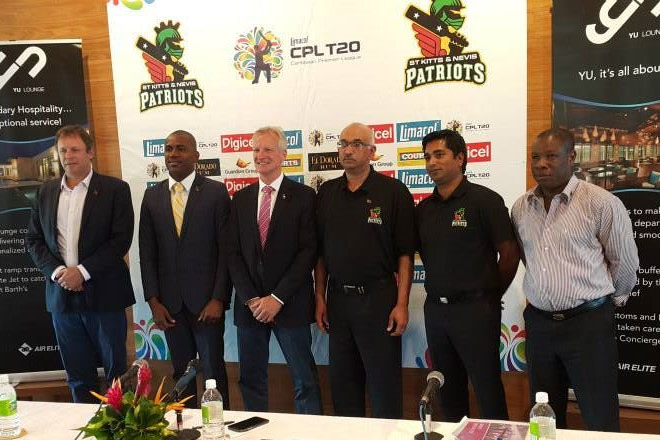 (ZIZ News) — The Government of St. Kitts and Nevis has ensured that the Warner Park Cricket Stadium will host its scheduled matches during the 2015 edition of the Limacol Caribbean Premier League.

Earlier this month, Minister of Sports, Hon. Shawn Richards stated that no budgetary support had been put in place by the former administration to host the matches here.

However, at press conference held on Tuesday, Minister Richards said the Government will meet its obligations.

“My government has undertaken to assess the possible games of CPL 2015 and has concluded the following points: investment in the form of inward investment from sponsors, international fans and CPL. The CPL franchise team remaining resident on island during the practice and match season of the CPL tournament matches ensures that accommodations, transportation and insurance cost of team personnel remain on island. Marketing: as team naming ensures worthwhile positioning of the Federation of St. Kitts-Nevis name and attracts sponsorship opportunities to offset subsidy costs,” the minister stated.

Mr. Richards admitted that there had been doubt about the government’s ability to accommodate the matches in St. Kitts but pointed out that Cabinet realised the economic benefits to be derived from hosting the matches.

He said, “For this year, we have to pay $2.5 million to host those games. The entire amount should have been paid already in three installments with the last payment becoming due and payable on the 16th of April, which was sometime last week. To date, we have not paid any of that sum. As such, Cabinet would have had to sit down and take a look as to available of funds for the Government to be able to meet such a commitment. We have however assessed the economic benefits of having CPL hosted here in St. Kitts and Nevis, we have looked at the fact that indeed St. Kitts and Nevis has a franchise for the very first time, in the St. Kitts-Nevis Patriots, and so we looked at the overall costs versus the benefits to the federation of St. Kitts and Nevis plus the fact that a contract would have been signed already and took a decision to go forward in hosting the games.”

The minister revealed that the government has committed to a total contract cost of $7.25 million to be paid in five installments for the period 2015-19.

“This is indeed a groundbreaking day for CPL and we believe for the people of St. Kitts and Nevis,” Russell noted. “We’re extremely appreciative of the St. Kitts and Nevis Government for making this day happen and for supporting CPL’s newest team, the St. Kitts and Nevis Patriots. I want to make specific mention of the unstinting work that Minister Richards has afforded this project since he came into office just a few months ago,” he added.

The 2015 Limacol Caribbean Premier League bowls off on June 20th, with the St. Kitts and Nevis Patriots playing its first home match on June 30th against the Jamaica Tallawahs.