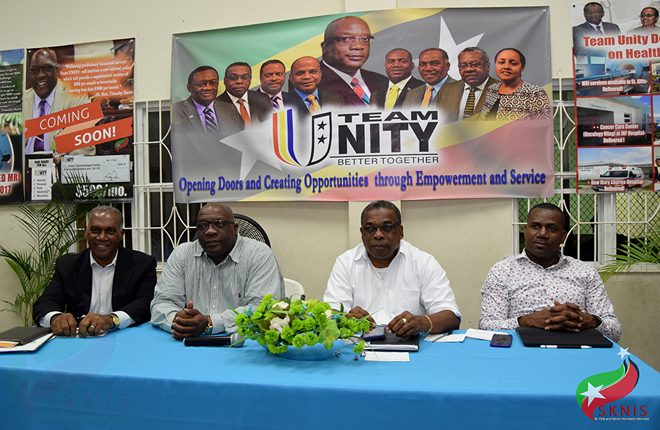 Government of St. Kitts-Nevis taking its next town hall meeting to the St. Paul’s community

(Press Unit in the Office of the Prime Minister) – On Wednesday, March 21, the Team Unity Government of St. Kitts and Nevis will be staging its fifth in a series of town hall meetings dubbed “The People’s Forum”, with this one taking place at the St. Paul’s Community Centre in Constituency Six.

The Honourable Eugene Hamilton will chair the proceedings.

Speaking at his March 14 press conference, Prime Minister Harris noted that the series of town hall meetings “has been an excellent showing of solidarity with the concept of good governance at the grassroots level.”

“We saw them really as putting democracy at work. We saw them as an opportunity of going into the communities to engage people on their time [and] on their turf, if you will, and to hear from them how the government was doing and how better the government can serve their purpose,” Prime Minister Harris added, noting that these meetings represent another avenue that enhances the accountability of the Team Unity Government.

Referencing the last town hall meeting, which was held at the St. Johnston Community Centre on Tuesday, March 13, the prime minister said, “We had a community centre which was ram packed and overflowing – an indication that these town hall meetings are attracting crowds of people, which is perhaps the best indicator of their value.”

Dr. Harris further noted that he is particularly impressed with the fact that individuals journey from near and far just to be a part of these important meetings.

He continued, “We had a hotelier of longstanding in the country in Mr. [Richard] Boon of Timothy Beach [Resort] who came…to a town hall, sat for three hours, was excited for what was being said and done there, and when he got up he commended the government—he commended me for my leadership and commended us for our work and then began to give us his own recommendations about things that the government should consider doing. That to me is very good.”

Wednesday’s town hall meeting at the St. Paul’s Community Centre will be carried live on ZIZ Television (Channel 5), ZIZ Radio (95.9, 96.1 and 96.9 FM) and streamed at www.zizonline.com and via the SKNIS Facebook page.