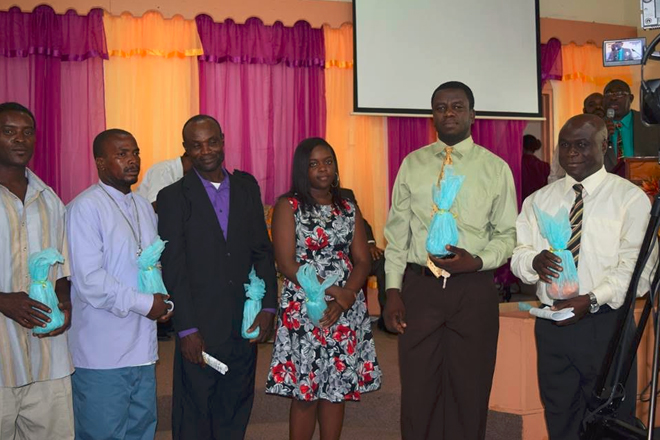 (SKNIS): Sanitation workers across St. Kitts and Nevis were honoured on Sunday (September 04) at a special thanksgiving service organized by the Apostolic Faith Mission.

Pastor Lincoln Hazell and his congregation hosted the 14th annual Sanitation Workers Appreciation Day designed to show appreciation to the men and women who help to keep the Federation clean. The function was held at the church, based at St. Johnston Avenue, and was attended by a number of senior Government figures, including the Governor General’s Deputy, His Excellency Michael Morton; Prime Minister, Dr. the Honourable Timothy Harris; Premier of Nevis and Senior Minister in the Federal Cabinet, Honourable Vance Amory; Minister of Health, Honourable Eugene Hamilton; and Minister of Public Infrastructure, Honourable Ian Patches Liburd.

Prime Minister Harris commented on the attendance by the dignitaries and described it as a reflection that “the country understands and appreciates the importance of the work that has been done by all our environmental workers.”

“I want to impress upon us all as we approach the challenge of nation building, we must realize that all of our citizens and residents have different but equally vital roles to play in advancing the development of beautiful St. Kitts and Nevis and strengthening our community bonds and hence the likelihood for greater progress for St. Kitts and Nevis,” he said.

Dr. Harris thanked the sanitation workers for their dedicated service and encouraged them to continue that commitment to duty.

Meanwhile, Minister of Health, Honourable Eugene Hamilton, applauded the health inspectors and sanitary officers within the Department of Health.

“Due to your vigilance, the communities are kept clean and persons are fully informed about the need to keep their environment clean in order to reduce the risk of exposure to diseases and illnesses such as Chikungunya, Dengue and Zika,” he stated. “… I therefore take this opportunity to express my sincere and profound appreciation to all of you who are sanitation workers for doing an excellent job and I applaud the Apostolic Faith Mission for its efforts in bringing you the recognition that you deserve.”

Workers from the Public Health Department, Park and Beaches Unit, and Solid Waste Management Corporation in St. Kitts attended the event. They were joined by employees from their sister agencies in Nevis.

Twenty-three sanitation workers were awarded. Two special awards were also presented to George Hodge, a retired Senior Health Inspector, and Julia James, who came up with the inspiration to host the Sanitation Workers Appreciation Day.