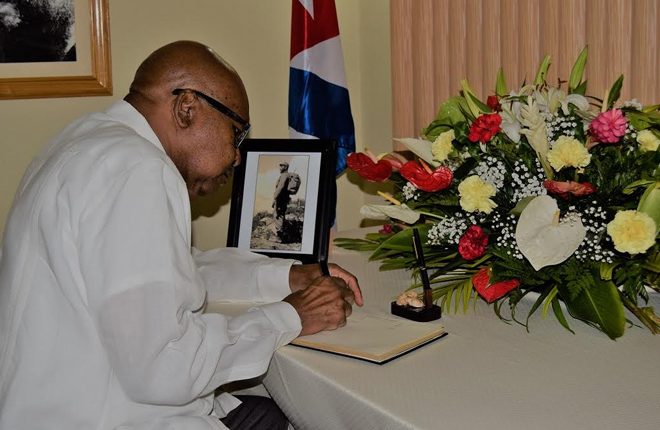 During a visit to the Cuban Embassy on November 30th, 2016, Sir Tapley signed the Book of Condolences before speaking to Ambassador Cabrera.

Describing Castro, who was well-known as “El Comandante”, as an “iconic leader,” of not only Cuba but the Americas and the World, Sir Tapley Seaton indicated that he had had the great pleasure of meeting him on a visit to Cuba. “I have to take a photograph out of my archives and display it because it was really a momentous moment,” said His Excellency.

The Governor General, speaking about the legacy of Comandante Castro said, “Certainly we continue to benefit from his visionary policies and we look forward to continuing that excellent relationship as I am sure would be his desire.”

Fidel Castro Ruz ruled the Caribbean nation of Cuba with 11 million people for almost 50 years. He died on Friday, November 25. He was 90 years old.