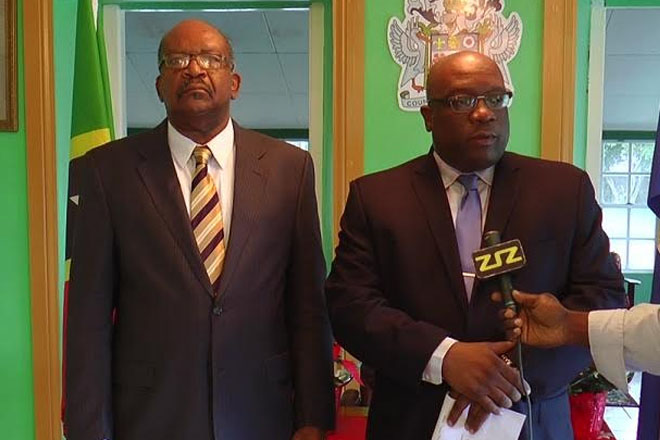 Prime Minister of St. Kitts and Nevis, Dr. the Hon. Timothy Harris stopped by Government House on Monday to officially congratulate the country’s Governor General on his most recent appointment of Knight Grand Cross of the Most Excellent Order of St. Michael and St. George [GCMG].

“I want to express on behalf of the Cabinet of St. Christopher and Nevis our distinct pleasure that Her Majesty the Queen has seen it fit to further honour and elevate one of our sons of the soil,” he said.

The Prime Minister noted that His Excellency Sir Samuel Weymouth Tapley Seaton has had a commendable year after being appointed to serve as Acting Governor General in May, then Governor General.

He said “on this third occasion of what one may consider a quick successive progression, meteoric in some respect in his rise to serve the country, Her Majesty has been gracious again and this time, to accord him the special honour and accolade as Knight Grand Cross of the Most Distinguished Order of St. Michael and St. George G.C.M.G has now been conferred upon him.”

Prime Minister Harris made it clear that the entire Cabinet was proud of Sir Tapley’s accomplishment.

He also wished him well in further fulfillment of yeoman service to the nation.

In response, Sir Tapley reiterated his commitment to the people of St. Kitts and Nevis.

“I pledge to continue to serve my country and the people of this country in the best way possible and I certainly look forward to that and thank you Prime Minister for the initiative in terms of getting all of the various aspects of my appointment in place,” he said.