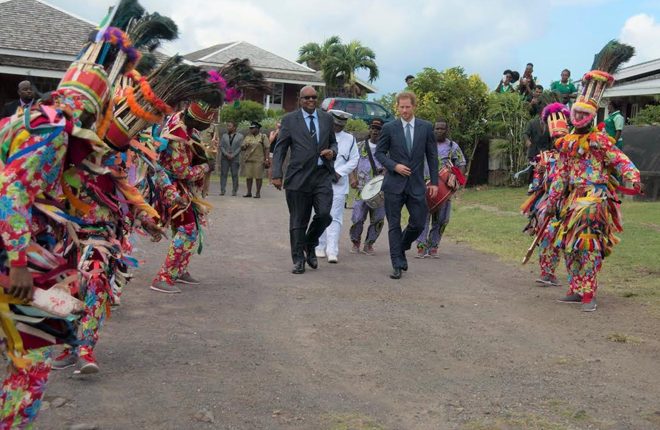 (SKNIS)—As His Royal Highness Prince Henry (Harry) of Wales continues on his tour of several Caribbean islands on behalf of his grandmother, Her Majesty Queen Elizabeth the Second, the Governor General of the Federation of St. Kitts and Nevis, His Excellency Sir Tapley Seaton, reflecting on Prince Harry’s visit to the Federation on November 23, said he was pleased and that he found the 32 year old prince “extremely personable and able to converse.”

“You had some masquerades who were very colourful and a young one who presented a gift…and I was telling them, for example, when I was much younger, I would do the dance and so Prince Harry did a bit of a jig in terms of the dance and he said “did you do it that way?”, so we did have that sort of fun,” Sir Tapley said.

“He’s extremely personable and able to converse and I reminded him of course of his earlier visit to St. Kitts and Nevis with his mother and his older brother when they came on holiday to Nevis…it was a private visit,” said Sir Tapley, who is no stranger to royal visits and who knows the ropes when it comes to royal protocol.

“We don’t need to be briefed on protocol in terms of anything because we have done it on so many occasions. In 2012, we had Prince Edward visiting us, so we are accustomed to be dealing with matters of protocol and in my particular case, I think I am very much accustomed to that because of the relationships, the contacts we have with the Palace and so on,” the governor general said to Charlotte Wace, a reporter for the UK based newspaper, Mail on Sunday, in an interview on November 24 at Government House.

“We found the visit quite fine. Everything went well. I think Prince Harry enjoyed his stay. He was very relaxed and we function in a relaxed atmosphere but we try to adhere to matters of protocol, that we respect the members of the royal family,” Sir Tapley said.

“We have had royal visits before. I was actually in charge of the Royal Visit of Her Majesty in 1985 so I am accustomed to being head of those. I was then attorney general and so functioning here now, we have had to be the liaison between Kensington Palace and St. Kitts and Nevis through our High Commissioner in terms of the visit. We are satisfied that everything went well,” he said.

The governor general said that he and Prince Harry spoke about issues with St. Kitts and Nevis and that the prince was presented with a gift of books so that he could learn the history of the twin-island nation, including Brimstone Hill.

“We had a lighthearted conversation. An unexpected visit was to the tomb of Sir Thomas Warner in Middle Island. He was our first English Governor…so I was able to fill him in about the interesting historical aspects of Thomas Warner and the discovery we had of a great, great grandfather, Thomas Jefferson, who lived here at the same time. I’m a history buff and a conservationist at all times, so I was able to fill him in on these sort of things,” Sir Tapley said.

Being a conservationist, Sir Tapley said that the unveiling of a plaque at Brimstone Hill by Prince Harry in dedication of the Central Reserve Forest in St. Kitts to the Queen’s Commonwealth Canopy project “is something that would be a plug for our conservation efforts.”

Sir Tapley reflected on other memorable aspects of Prince Harry’s trip including the reception that he hosted at Government House where former Governor General His Excellency Sir Edmund Lawrence formally received his knighthood.

And, he was particularly impressed with the reception that the children gave to Prince Harry.

“It was something that the children were heartened to see because he’s someone who can interact with them very well. There is a young girl who poked through the barricade with a drawing that she had done and he pocketed it and so he interacted…and in Nevis, the enthusiasm of the children was overwhelming. We had to be restraining them and so on, so I was very happy with the response,” Sir Tapley said.

“I indicated to him (Prince Harry) that he would be more than welcome to come back,” he added.