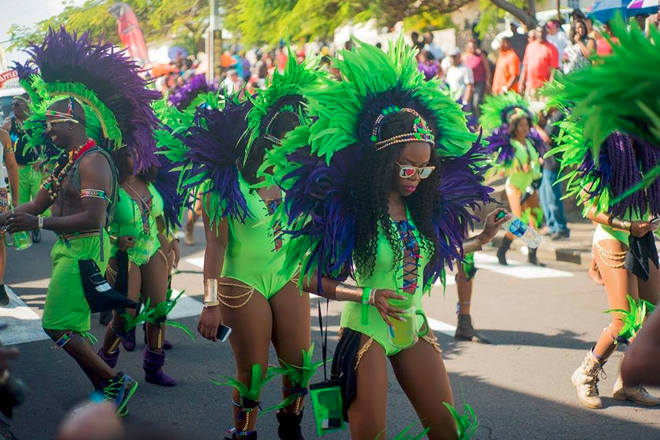 (ZIZ News) — It was a sea of colour and revelry on Friday afternoon as hundreds of mas players filled the streets of Basseterre in the Grand Carnival Parade.

The event is normally regarded as the highlight of street activities and featured Carnival troupes, folklore groups and winners of the various Sugar Mas competitions.

Spectators lined the streets to get a glimpse of the colourful troupes and other groups as they passed by.

Among the participants were the St.Kitts-Nevis Majorettes, Banker’s Mas Camp’s troupe “Golden Memories: #Ahculturalselfie”, Ultra Carnival with “Escape”, Fhun Vybz with “Glitz & Glamour”, DFX & Real Right Entertainment’s “The Other Side Of Midnight”, Solid SKB’s “The Garden Of Eden”, and Splash Mas’ troupe “Phenomenal”.

The procession began at the Patsy Allers Play-field and followed the route assigned through Downtown Basseterre, passing several judging points along the way.

Officials selected winners in various categories such as “Troupe of the Year”, “Best Awareness Group”, “King of the Band” and “Queen of the Band”.

This was also the last chance for bands and individual artistes to compete for the Road March title, which this year, carries a $12,500 prize.

The winner of the Troupe of the Year award will collect a $25,000 prize.