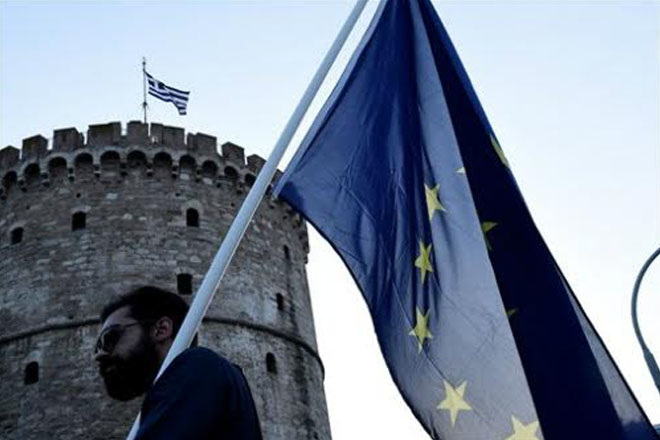 Athens, Greece (AP) — Greece finally met a deadline that counted on Thursday and made a series of sweeping proposals that its creditors needed by midnight to set off a mad rush toward a weekend deal to stave off a financial collapse of the nation.

The package met longstanding demands by creditors to impose wide-ranging sales-tax hikes and cuts in state spending for pensions that the left-leaning Greek government had long resisted.

It raised hopes that Greece can get the rescue deal that will prevent a catastrophic exit from the euro after key creditors said they were open to discussing how to ease the country’s debt load, a long-time sticking point in their talks.

In the text of proposals sent by Athens late Thursday, the government conceded to demands it had previously refused to accept — mostly on moving various categories of goods and services to higher sales tax rates — in exchange for a new 53.5 billion-euro ($59 billion) bailout package.

The government said the proposals would be voted on by Greece’s parliament late Friday before an emergency summit Sunday of all 28 European Union leaders.

After months of foot-dragging despite impending chaos, Greek Prime Minister Alexis Tsipras met a midnight deadline with more than an hour to spare. The spokesman for eurogroup President Jeroen Dijsselbloem tweeted that it was “important for institutions to consider these (proposals) in their assessment” of the Greek situation.

Finance officials from the European institutions and the International Monetary Fund were to fine-comb through the proposals on Friday before the 19 eurozone finance ministers assess them on Saturday.In ideal circumstances, a summit of the full European Union would be able to approve them on Sunday.

Greece has long argued its debt is too high to be paid back and that the country requires some form of debt relief. The International Monetary Fund agrees with the premise, but key European states like Germany have resisted the idea.

On Thursday, German Finance Minister Wolfgang Schaeuble said the possibility of some kind of debt relief would be discussed over coming days, though he cautioned it may not provide much help.

“The room for maneuver through debt reprofiling or restructuring is very small,” he said.

Making Greece’s debt more sustainable would likely involve lowering the interest rates and extending the repayment dates on its bailout loans. Germany and many other European countries rule out an outright debt cut, arguing it would be illegal under European treaties.

Tsipras met with finance ministry officials and his cabinet throughout the day Thursday to finalize his country’s plan, a day after his government requested a new three-year aid program from Europe’s bailout fund and promised to immediately enact reforms, including to taxes and pensions, in return.

The last-minute maneuvers come as Greece’s financial system teeters on the brink of collapse. It has imposed restrictions on banking transactions since June 29, limiting cash withdrawals to 60 euros ($67) per day to stanch a bank run. Banks and the stock market have been shut for just as long.

The closures, which have been extended through Monday, have led to daily lines at ATM machines and have hammered businesses. Payments abroad have been banned without special permission.

“Can you see anybody in the shop? Nobody’s coming in, because everyone’s living off a drip,” said Magda Petridi, a fortune teller who runs a shop selling good luck charms, aromatic oils and trinkets. “Until a month ago business was going pretty well.”

Pensioners without bank cards have been particularly hard hit as they have struggled to access their accounts. Some branches have been opened so the elderly and unemployed without bank cards can withdraw a maximum weekly sum of 120 euros each. Hundreds lined up outside banks Thursday morning, many facing hours-long waits in the heat.

Meanwhile, many ATMs had a shortage of 20 euro notes, effectively reducing the daily withdrawal limit to 50 euros.

If Tsipras does not get a deal, Greece faces an almost inevitable collapse of the banking system, which would be the first step for the country to fall out of the euro.

“I believe he will have to get an agreement. We will pay dearly for it, but at least we’ll get an agreement,” said mechanic Pantelis Niarchos, walking down the street in central Athens.

After months of fruitless negotiations with Tsipras’ government, elected in January on promises to repeal bailout austerity, the skeptical eurozone creditor states had insisted they wanted to see a detailed, cost-accounted plan of reforms.

Greece’s financial institutions have been kept afloat so far by emergency liquidity assistance from the European Central Bank. But the ECB has not increased the amount in days, leaving the lenders in a stranglehold despite capital controls.

German ECB governing council member Jens Weidmann argued Greek banks should not get more emergency credit from the central bank unless a bailout deal is struck.

He said it was up to eurozone governments and Greek leaders themselves to rescue Greece.

The central bank “has no mandate to safeguard the solvency of banks and governments,” he said in a speech.

The ECB capped emergency credit to Greek banks amid doubt whether the country will win further rescue loans from other countries. The banks closed and limited ATM withdrawals because they had no other way to replace deposits.

Weidmann said he welcomed the fact that central bank credit “is no longer being used to finance capital flight caused by the Greek government.”