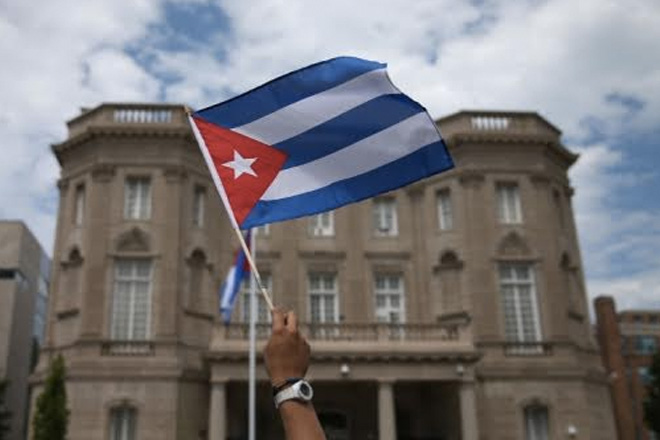 Grievances persist despite start of new era in US-Cuba ties

Washington (AP) — The Cuban national flag fluttered in the Washington sun Monday as the US and Cuba formally ended more than a half-century of estrangement, formally re-establishing relations severed at the height of the Cold War. But the symbolism of an embassy ceremony could not conceal deep, lingering conflicts between the nations.

In the sweltering July heat and humidity of America’s capital, Cuban Foreign Minister Bruno Rodriguez presided over the flag-raising ceremony just hours after an agreement to restore diplomatic ties broken in 1961 took effect at the stroke of midnight. He later met with Secretary of State John Kerry, becoming the first Cuban foreign minister to set foot in the State Department since 1958.

Kerry announced that he would make a reciprocal visit to Cuba to dedicate the US Embassy in Havana on August14. He spoke of a need to move beyond the enmity that was spawned as President John F Kennedy grappled with Fidel Castro’s revolution and Soviet expansionism and that hardened over the 54 years that followed.

Despite pledges of goodwill and mutual respect, ghosts of past animosity hung over the events.

At the reopening of the Cuban embassy and again at a joint news conference with Kerry, Rodriguez repeated demands for the US to end its 53-year embargo, return the US naval base at Guantanamo Bay, stop efforts to change or reform Cuba’s communist government and pay compensation for damage done to the island and its people over the past five decades.

“I emphasised that the total lifting of the blockade, the return of illegally occupied territory of Guantanamo as well as full respect for Cuban sovereignty and compensation to our people for human and economic damages are crucial to be able to move toward the normalisation of relations,” Rodriguez said as Kerry stood beside him.

On a more conciliatory note, Rodriguez thanked President Barack Obama for his conclusion that US policy toward Cuba was faulty, his steps to ease sanctions thus far and his calls for Congress to repeal the embargo.

Rodriguez noted that there are “profound differences” between the US and Cuban governments but stressed that “we strongly believe that we can both cooperate and coexist in a civilised way based on due respect for these differences.”

Kerry, speaking briefly in Spanish, said America wants to work with Cuba to improve conditions there. But he also acknowledged persistent differences over human rights, democracy and reparations and flatly rejected the suggestion that Guantanamo would be returned to Cuba anytime soon.

“We celebrate this day — July 20 — as a time to start repairing what has been broken and opening what for too long has been closed,” Kerry said.

He added, though: “This milestone does not signify an end to the many differences that still separate our governments. But it does reflect the reality that the Cold War ended long ago and that the interests of both countries are better served by engagement than by estrangement.”

Kerry compared the conflicting sentiments with the normalisation of US ties with Vietnam 20 years ago. In both cases, he said, “passions ran deep and run deep to this day.”

Some U.S. lawmakers, including several prominent Republican presidential candidates, have vowed not to repeal the embargo and have pledged to roll back Obama’s moves on Cuba.

New Jersey Sen. Bob Menendez, a Democratic opponent, said, “There may be a flag raising over the embassy of a dictatorship, but the real goal is a flag raising where the Cuban people are free, have their human rights respected and where we do not accept dictatorial conditions on our embassy and its people.”

At embassy, several hundred people gathered on the street outside, cheering as the Cuban national anthem was played and three Cuban soldiers in dress uniforms raised the flag.

At his remarks inside the embassy, Rodriguez cited Cuban independence leader Jose Marti, who he noted had paid tribute to America’s values but also warned of its “excess craving for domination.” Cuba was able to survive the past 50 years only because of the “wise leadership of Fidel Castro, the historic leader of the Cuban revolution whose ideas we’ll always revere,” Rodriguez said.

In Havana, meanwhile, a carnival atmosphere reigned around the new US Embassy overlooking Havana’s Malecon seaside promenade. By midmorning, the Cuban government had pulled back several of the eight or so security guards who had stood watch.

A pair of officers stood on each corner around the building, smiling and wishing “buenos dias” to passers-by instead of casting stony glares. Curious Cubans clustered around the forest of flagpoles at the front of the embassy, snapping photos as US tourists posed for selfies in front of the building.

Obama has sought engagement with Cuba since he first took office and has progressively loosened restrictions on travel and remittances to the island.

His efforts were frustrated for years by Cuba’s imprisonment of US Agency for International Development contractor Alan Gross on espionage charges. But months of secret negotiations led in December to Gross’ release, along with a number of political prisoners in Cuba and the remaining members of a Cuban spy ring jailed in the United States. On Dec. 17, Obama and Cuban President Raul Castro announced they would resume full diplomatic relations.

The US removed Cuba from its list of state sponsors of terrorism in late May. On July 1, issues of American diplomats’ access to ordinary Cubans were resolved and the July 20 date was set for the restoration of full relations.

“This is yet another demonstration that we don’t have to be imprisoned by the past,” White House spokesman Josh Earnest said in a statement about Monday’s events.