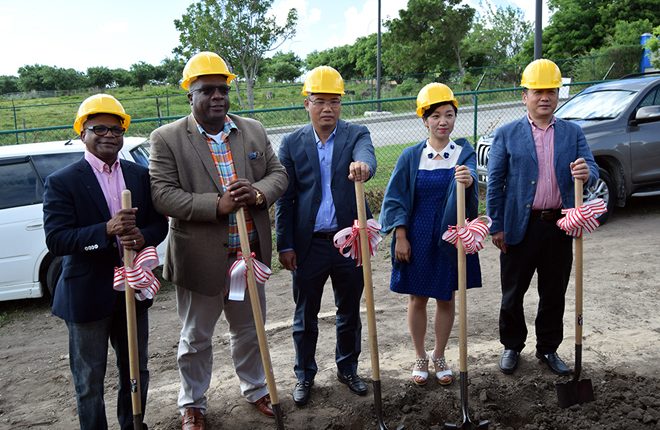 Ground-breaking of multi-million dollar hotel project is a reflection of the confidence in St. Kitts and Nevis’ economy

(Press Unit in the Office of the Prime Minister) – More than 100 jobs are expected to come on stream in the coming months, as the construction of another major hotel development is set to begin following a ground-breaking ceremony on Saturday, 11th November 2017 at Camps, St. Kitts.

The US$120 million Seaview Gardens Hotel Project, being undertaken by St. Kitts-Nevis Royal Limited, will feature a 350-room hotel, condominiums, villas, a casino, as well as commercial and recreational spaces on just over 19 acres of land.

St. Kitts and Nevis’ Prime Minister, Dr. the Honourable Timothy Harris, while addressing Saturday’s ceremony, thanked the team of developers and investors, led by Mr. Alex Lee, for contributing to the further economic development of the twin-island Federation.

Referencing the Park Hyatt St. Kitts Christophe Harbour, which will have its official opening on Friday, 17th November, the Honourable Prime Minister said, “During the construction phase of just under 150 units, [Park Hyatt] created jobs for 800 persons at its peak. Now imagine if you have a 350-room facility how many persons are going to benefit.”

Minister of Tourism, the Honourable Lindsay Grant said the injection of US$120 million in direct foreign investment will have important spillover effects that should benefit many Kittitian and Nevisian businesses.

The Minister said, “As the Government continues its development strategy in line with the National Adaptation Strategy for the Diversification of the Economy, hotels, villas, and condominium developments [such as the Seaview Gardens project] are important components in the country’s economic development, and would bring benefits to the citizens of our country.”

Minister Grant continued, “Some of these benefits include, but are not limited to, revenues from room tax; the purchase of local food, in particular, agriculture produce; taxi services; tours, and the emergence of other spinoff businesses such as spas and restaurants, just to name a few. An important indirect impact of growth in hotel room inventory is that it also supports our airlift coming into St. Kitts and Nevis, which translates into increased stay-over visitors.”

It is anticipated that more than 100 persons will be employed during the construction stage of the project, while another 300 persons are expected to be employed for the operation of the hotel.

The US$120 million dollar Seaview Gardens Hotel Project will be rolled out in three phases over a five-year period.