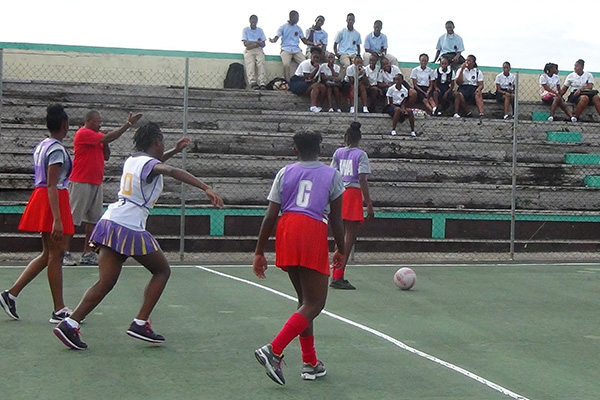 GSS edges out CSS in a thriller

It was billed to be the proverbial ‘clash of the ants’ but the impressive crowd that showed up for the matchup between the Gingerland Secondary School and the Charlestown Secondary School teams, witnessed one of the more keenly contested encounters for the entire tournament.

This as action continued in the Inter High Schools’ netball tournament at the Grell Hull –Stevens netball Complex, on Monday 18th November.

Both teams showed up with their support crews and cheer leaders, with the CSS team, understandably having the home court advantage and more overall supporters at the Complex.

At half time, the CSS crowd was virtually silenced with the score line 13 to 8 in favour of the GSS team.

However, a spirited CSS team returned in the third quarter and turned the game on its head. Suddenly the CSS supporters were alive again and shouted loudly for very goal scored.

A shocked GSS team had no response and by the end of the third quarter, they were still stuck on 13 and the CSS team had progressed to 14.  Match on!

The last quarter proved to be the most intense of the game.  both teams came out giving it their all and matched each other shot for shot and aided by some quick turnovers and the occasional great defensive play, the scores were tied 19-all as the seconds ran out but GSS managed a crucial goal and CSS did not have enough time to respond as the final whistle blared.

Final score: A heart stuttering 20 to 19 in favour of the GSS team.