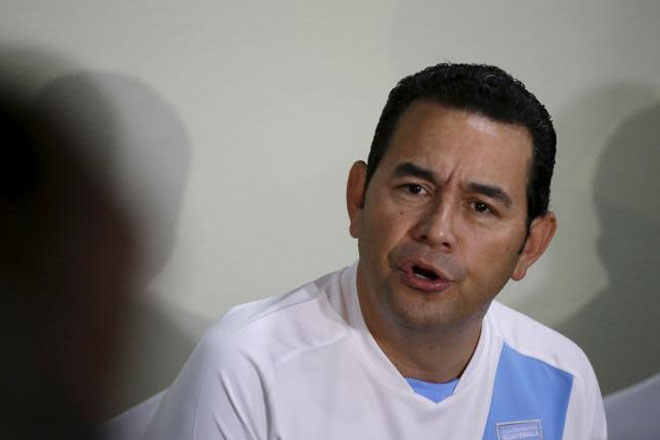 (Reuters) – Guatemalan comic Jimmy Morales should triumph easily in a second round run-off on Sunday to elect the country’s next president after the arrest of the previous leader in a massive corruption scandal, a poll showed on Wednesday.

Morales, a political outsider given little hope of winning until graft probes engulfed the government of ex-president Otto Perez, is forecast to win by more than 30 points over his opponent, according to a voter survey by polling firm Prodatos.

The poll gave Morales, a self-proclaimed centrist with conservative leanings, 58.5 percent support, ahead of ex-first lady Sandra Torres, a center-left candidate, on 27.6 percent. The remainder expressed no preference for either.

Perez resigned last month just days ahead of a first round of voting after Congress stripped him of his presidential immunity and Guatemala’s attorney general accused him of involvement in a multi-million dollar customs fraud.

By then, various investigations by a U.N.-backed anti-corruption body working with the attorney general had gutted the retired general’s cabinet and brought about the arrest of Perez’s former vice-president over the customs racket.

Both Perez and Roxana Baldetti, his ex-vice-president, are now in custody awaiting trial over the customs scam.

Public anger over the corruption scandals sparked mass protests throughout the summer against Perez and pushed 46-year-old Morales to the front of opinion polls, in part due to the fact he has no experience of elected office.

Morales then won the first round of voting on Sept. 6, putting him into a direct run-off with Torres.

Some analysts in Guatemala say that Torres’ political savvy and having the support of the machinery of one of the country’s main parties could still yield a closer outcome on Sunday than some opinion polls have suggested.