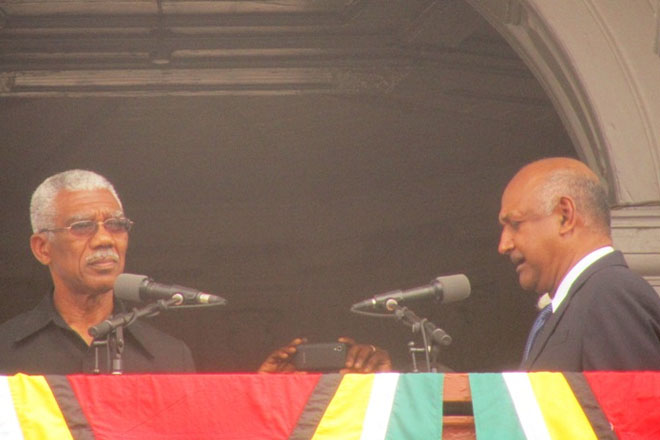 Basseterre, St. Kitts (SKNIS) — St. Kitts and Nevis Prime Minister, Honourable Dr. Timothy Harris has congratulated the president of Guyana David Granger on his victory at the polls in general elections held on May 11.

President Granger’s government is a coalition of the predominately Afro-Guyanese, A Partnership for National Unity and the multiracial Alliance For Change (APNU/AFC) political movements.

In a letter to President Granger, Prime Minister Harris wrote, “I congratulate you on your victory at the polls. Your government of national unity symbolizes again, that when governments fail to meet the needs of its citizens; fails to embrace the principles of good governance and democracy, the people will answer at the polls. The people of St. Kitts and Nevis did, and so have the good people of your country Guyana.” He went on to offer congratulations to the leadership and members of the coalition partnership, “I congratulate you and all members of your government and the executives of the coalition.”

Prime Minister Harris continued, “The government and people of St. Kitts and Nevis have enjoyed an amicable relationship with the government and people of Guyana and with the many of your nationals who call St. Kitts and Nevis home. We are pleased that the democratic will of the people prevailed. I look forward to working with your government as we seek to deliver a better quality of life for our people and ensure their fair share and prosperity in our respective countries.”

President Granger will be sworn in publicly on May 26, 2015, Guyana’s Independence Day.