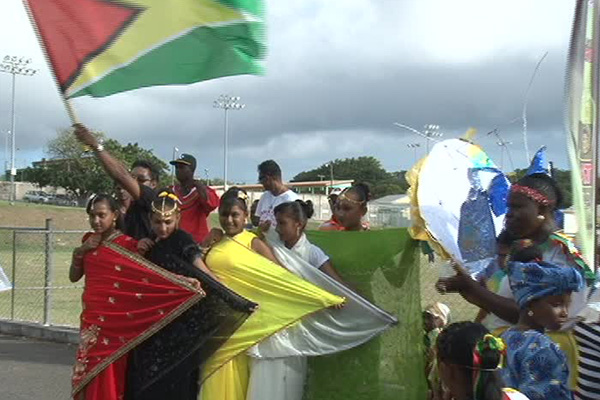 NIA Charlestown Nevis — Deputy Premier of Nevis and Minister of Culture Hon. Mark Brantley told the Guyanese community on Nevis that they should feel comfortable and were welcome to stay once they were helping in the development of Nevis.

The Minister was at the time delivering brief remarks at a ceremony at the Elquemedo T. Willett Park to mark the second Republic Day (Mashramani) celebrations, held on Nevis by the Guyanese Association of Nevis on February 22, 2014. This year marked the 44th year of the celebration in Guyana.

Minister Brantley noted that he was pleased to witness the Guyanese celebration first hand and invited Guyanese living on Nevis to take part in the upcoming Culturama 40 celebrations slated for later in the year.

Meantime, Keith Glasgow, Permanent Secretary in the Ministry of Social and Community Development who stood in for Junior Minister Hon. Hazel Brandy-Williams, told those gathered for the celebration that the observance of their homeland’s celebration was a simple but symbolic function.

“Unity always means strength. As a united force you have so much more bargaining power. United you are a force to be reckoned with but beyond unity, the migration of Guyanese to Nevis has added to the diversity of the population,” he said.

According to Glasgow, as a result of the influx of other cultures among them Guyanese, Nevis had become more diverse, however, he pointed out that diversity was something that should be embraced once it promoted unity.

So whether you are Nevisian or Guyanese, our differences are not as significant as our similarities as a people. We have similar goals and aspirations. Generally we crave for a decent standard of living and quality of life. We also share similar values and virtues, of course, are universal,” he said.

The Permanent Secretary also used the occasion to urge all to take advantage of differences and use them to their advantage.

“We should take advantage of our differences and turn them into beneficial relationships. Our differences really, should be our strengths and should be opportunities for us. We need to do what it takes to provide win-win outcomes for both Nevisians and Guyanese. Perhaps diversity with training can help us in this regard,” he said.

In conclusion, Glasgow conveyed congratulations to the Guyanese community on Nevis, on behalf of the Ministry of Social and Community Development.

The programme which was dotted with Guyanese cultural dance, poetry and song chaired by Kenrick Liverpool, went into the night. Also in attendance were other members of the Nevis Island Cabinet and the Nevis Opposition.