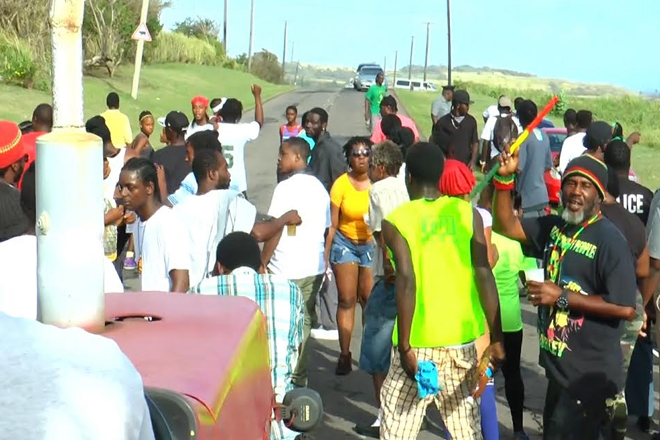 (ZIZ News) — The Friends and Family of Mansion and Christ Church continued their celebrations with a number of Gypsy Mas Festival activities this past weekend.

The committee kicked off the weekend with a “We Got Talent” show on Friday night. The event saw performances by various members of the Mansion community.

Janelda Browne won the impromptu talent competition, granting her a complimentary ticket to the Queen and Calypso Shows this weekend.

The highlight of the evening was Lionel Gumbs, also known as “The Mansion Bull” who entertained the audience.

On Saturday, revellers participated in the Gypsy Mas J’ouvert Jam early that morning.

The Grandmasters Band led the crowd through the streets of the village ending the session on the Mansion Playing Field.

Deputy Chairperson of The Friends and Family of Mansion and Christ Church committee, Ardis Belle said despite the unfortunate weather conditions, she was pleased with the turnout.

“Once again, even though the weather was not the best, we made the best of that situation and all those persons who were there enjoyed themselves to the max. So look out again, Gypsy Mas Mansion village 2016. There is still lots and lots and lots of fun to come”, Belle expressed.

Later that evening, many returned to the field to witness performances by Shanna, I-mark, Infamus, Mod Stoney and sounds by the Bacchanalist Band and Evolution Sounds at a concert dubbed, “Night of the Stars”.

The weekend long festivities ended with a Sunday Fun-Day where Belle mentioned, seeing the interaction between the adults and children was admirable.

“With regards to our fun day that we had on Sunday, I must admit that the kids enjoyed themselves and by extension the adults. I was so happy to see persons interacting and playing domino and football and cricket. The kids were enjoying themselves in the bouncing castle and we had a miniature basket-ball hoop and of course the adult races, the balloon bursting competition. It was really enjoyable and exciting to see both adults and children interacting”, she added.

The Gypsy Mas festival continues with a Queen show on Friday and a Parade Day on Saturday 19th.