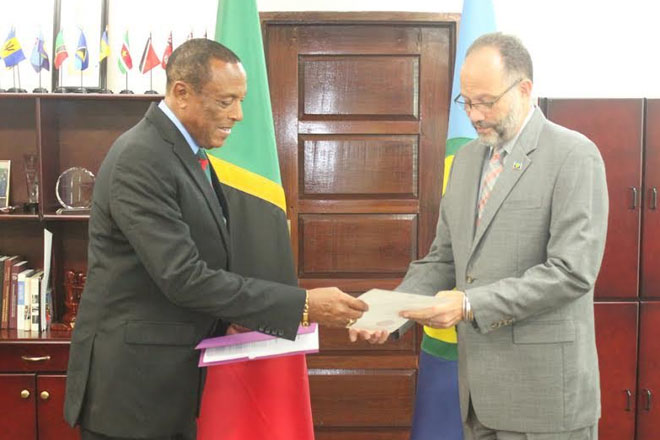 Basseterre, St. Kitts (SKNIS) — In a brief, yet very symbolical ceremony held at the Office of the Secretary General of CARICOM in Guyana on Tuesday 22nd September, St. Kitts and Nevis Ambassador to CARICOM, His Excellency (H.E.) Lionel Sydney Osborne presented his credentials to Ambassador Irwin La Rocque, signalling his official accreditation to the prestigious regional body.

In his remarks to the Secretary General, Ambassador Osborne highlighted that the commencement of his journey as an Ambassador to CARICOM, is indicative of a fresh start for the relations between St. Kitts and Nevis and the Caribbean Community. H.E. Osborne further assured the Secretary General, that the government and people of St. Kitts and Nevis were committed to the regional integration movement and fostering a new era of solidarity with member states.

“We subscribe to the idea that we all achieve more when we work together. In St. Kitts and Nevis you will find a solid partner,” Ambassador Osborne noted. He also spoke about the issue of the vulnerability of Member States to natural disasters and the debilitating effects that climate change is already having on these countries, noting that it is important therefore for CARICOM to “continue to insist on a coordinated and meaningful response from the global community.”

Secretary General La Rocque congratulated Ambassador Osborne on his new appointment and welcomed him to the Community, informing him that he has now joined the newest body of the Community, notably the Committee of Ambassadors, which consists of all the Ambassadors of the Member States of CARICOM. The Secretary General also used the opportunity to remind the Ambassador of the responsibilities of his new role, noting, “You will therefore be one of the change drivers, as we seek to reposition the Community, in keeping with its Strategic Plan for the period 2015-2019.”